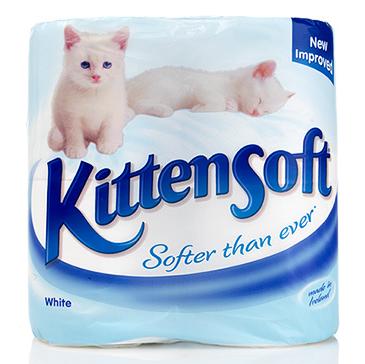 Fluttershy: I think this widdle puddy tat has your name written all over it! Yes he does...
Kitten: Mew! *nuzzles Rainbow Dash and generally looks adorable*
Fluttershy: ... aww, look, he likes you!

—My Little Pony: Friendship Is Magic, May the Best Pet Win! [1]

Kittens seem to provoke an automatic pleasure/protective/affection reaction in many (if not most) people. For this reason, they are often used by creators to arouse those feelings toward a character as well. Want to show that someone is a softy despite their crusty exterior? Have them rescue a kitten! Want to indicate that they're a Complete Monster instead? Torturing or killing a kitten will do it. Want to lighten a mood that's gone Darker and Edgier? Add a kitten or two.

Catgirl is a Sister Trope.

Contrast with Cats Are Mean. (Except when Cute Is Evil, in which case they go hand-in-hand.)

Examples of Cute Kitten include:

Ed: Come on Al, don't run! Think of the kitten!
Al: I know, I'm the only one who is! [Cut to the kitty holding on to Al for dear life]

Susan: I wonder what happened when the man who did this met my grandfather.
Lobsang: Would he have met your grandfather?
Susan: Oh, yes. And my grandfather is rather fond of cats.

Jon Stewart: Healthcare is today's hot-button issue, but...how did the kitten get in the box?

"Fuck you kitty, you're gonna spend the night OUTSIDE!"

"You can't sentence Sir Pounce to eternal torment!"
"It was an evil kitten. We can't give leniency for cuteness."

Carmilla: "No hurting the cute kitty!"