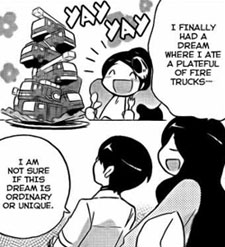 "I'm sorry I made you wear a cheerleader's outfit and glue miniature horses to the couch!"
—Dilbert

It can often be useful — or at least funny — to contrast the coherence of metaphorical or plot-driven dreams with "real" dreams that are far more bizarre.

When people actually dream, it doesn't make sense. Things happen in random orders, for no good reason. Nevertheless, "dream" is an incredibly potent metaphor. We use "dream" to mean "aspiration", and "nightmare" to mean "fear". Fictional characters are also likely to have meaningful dreams of some variety—either because they may have a supernatural ability that gives them these dreams, or just because, due to the Law of Conservation of Detail, only their meaningful dreams are reported in the story.

All this means that most of the time, when fictional dreams are described, they're considerably more coherent than real dreams ever are, a situation that's absolutely ripe for Lampshading.

Examples of Real Dreams Are Weirder include:

Jimmy: Even if I called in sick and went back to sleep, I'd probably have a completely different dream about my teeth falling out or a giant snake in a vest.

Phoenix: (Freud would have a field day with Pinkie Pie.)

Simone: Do you have a dream?
Pee-wee: Yeah. I'm all alone. I'm rolling a big doughnut, and this snake with a vest...

Genua was a place where all dreams came true. Remember some of yours?

"This is the land where dreams -- dreams, do you understand -- come to life, come real. Not daydreams: dreams." There was about half a minute’s silence and then, with a great clatter of armor, the whole crew were tumbling down the main hatch as quick as they could and flinging themselves on the oars to row as they had never rowed before... For it had taken everyone just that half-minute to remember certain dreams they had had -- dreams that make you afraid of going to sleep again -- and to realize what it would mean to land on a country where dreams come true.

When the hero tells us that “last night he dreamed a dream,” we are quite certain from the perfect and decorative character of the dream that he made it up at breakfast. The dream is so reasonable that it is quite impossible. [...] When the aged priest in a story narrates his dream, in which the imagery is dignified and the message plain, we are free to yield finally to a conviction that must have long been growing on us, and conclude that he is a somewhat distinguished liar.

I had a dream, my friends, oh yes, I had a dream — then suddenly my dream changed, and I was standing in a swimming-pool full of small brown puppies -- and each of the puppies had the face of a 19th-century politician — and then one of the puppies, that had the face of Lord Palmerston, suddenly started screaming at me, "Where's the spoons, where's the spoons, where's the bloody spoons?"
...Any questions?

Charlie: I have this dream... I'm driving a bus and my teeth start falling out. My mom's in the back eating biscuits. Everything smells of bacon. It's weird.

Max: I have a dream, America! It starts out where I'm in an all-nude production of Death of a Salesman on ice, but I haven't studied and I can't remember my lines. Suddenly, it begins to rain marshmallows, but that's okay, because trees are made of graham crackers, and chocolate bars are the official currency. I believe that by working together, we can make that dream a reality!

Martin Luther King: I had a dream.
Beat Panel
MLK: I was freaking flying!

Calpurnia: Caesar, you mustn't go today! I had a dream that you died.
Caesar: Why, that's amazing, Calpurnia. I had a dream! I was wearing a robe made entirely out of hot dogs.

"We just met a lamppost, and it's our best friend!"

Jeremy: Actually, it's funny you called, 'cause you were in my dream just now.
Candace: (smitten) Really?
Jeremy: Yeah, it was weird, you and I were in this Dixieland band, and there was an iguana playing the oboe...

Cho: I'm your worst nightmare!
Jason: (snorts) That is so old! Huh? Let me wipe the cobwebs off that line! ...but technically my worst nightmare to date is: I'm sitting in a high chair, and I'm breast-feeding my own mother, and she suddenly opens her mouth and I see my father's head...
Cho: Yeah yeah yeah, all right, I get it, shut up! You're giving me the creeps.