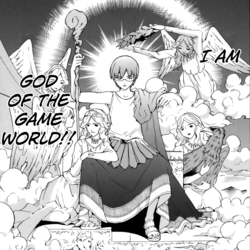 God to one world, Otaku to the other.

Keima Katsuragi is famous on the Net as "The Capturing God"; there is no Dating Sim that he cannot beat, no heroine he cannot capture—while in real life he's known as "otaMegane" and hates all real girls. One day, he receives a provocative email asking for his help in capturing some girls. He rises to the challenge, inadvertently making a Deal with the Devil to help Elsie, a low-ranking devil, catch runaway spirits. Apparently the spirits only hide in the hearts of troubled girls, and the only way to get them out is by making the girl fall in love. If he fails, the contract will take his head!

Thus begins Keima's daunting task as the human partner of a runaway-spirit catcher, which throws him deep into exactly what he's been dismissing: Real life, and more importantly, real girls.

The series' main purpose seems to be poking fun at different aspects of Dating Sims, or "Gal Games", and playing with various Moe and heroine archetypes, as well as aiming a megaphone at many, many things - hell, pretty much everything ever - and it has its own page to show it. Between its sense of humor and the neat artwork, it's a very recommendable series if you're looking for a comedy manga.

An anime by Manglobe began in October 2010, with a second season in April 2011. Both seasons have been licensed by Sentai Filmworks, with the first season having been released on DVD and Blu-Ray, dubbed.

Has a wiki: Kaminomi Wiki

Both seasons of the anime can be watched here at Crunchyroll.

The World God Only Knows is the Trope Namer for:
The Tropes God Only Knows
Retrieved from "https://allthetropes.org/w/index.php?title=The_World_God_Only_Knows&oldid=1899299"
Categories:
Cookies help us deliver our services. By using our services, you agree to our use of cookies.