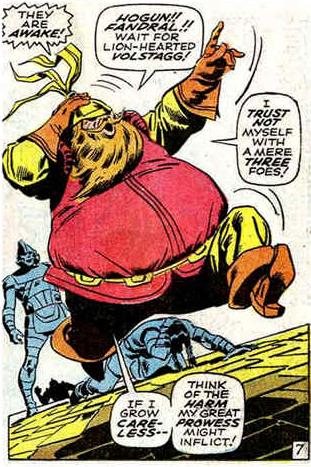 He's a soldier; he's a real man! Just listen to all his exploits and how the very gods are afraid of him! Admire his pristine uniform and shiny medals that prove his valour! He loves danger! He will seek out any peril to test himself against!

Just don't put him near an actual fight.

The Miles (pronounced "ME-lays"[1]) Gloriosus is usually a soldier, or claiming to be one. Great White Hunter, Gentleman Adventurer, or other dangerous occupations are also possible. And it is Always Male—women aren't expected to distinguish themselves in danger.

The Foil of The So-Called Coward. Since he is invariably all talk, falling for his stories is a mark of the Naive Newcomer. Those who are not taken in may, in peace and quiet, find him more or less amusing, which depends on his skill on storytelling, but when trouble arises, he is always The Load. May be No Hero to His Valet—type 1 only. Often considering himself God's personal gift to women, he is frequently part of a Love Triangle, his stories making him triumphant, until danger reveals to the heroine which man really is admirable.

May be a Small Name, Big Ego, but may also be running a con—and may be proud of his cleverness rather than his alleged prowess. It can be hard to tell because one of his chief traits is his utter shamelessness. No matter how clearly he was reduced to quivering terror by the merest hint of danger, as soon as the danger ends he will snap back to the boasting mode, making it hard to tell whether Believing Their Own Lies is in effect. He is incapable of realizing that people might think better of him if he says Think Nothing of It.

Any annoying braggart may be taken for the Miles Gloriosus, which is why subverting this, having them turn out to be brave and good at fighting -- or even just competent -- is a surprise. Such surprises often fall under Glory Seeker; he may also go for glory at the expense of others: Glory Hound.

Particularly annoying subtrope of Fake Ultimate Hero and particularly egotistical subtrope of The Munchausen. Inverse of the Cowardly Lion. Similar to Lord Error-Prone. If the plot ever forces him to stand and actually act like the badass he claims to be, then it's Becoming the Boast. Villainous versions may overlap with Hero Syndrome.

Examples of Miles Gloriosus include:

Retrieved from "https://allthetropes.org/w/index.php?title=Miles_Gloriosus&oldid=1937770"
Categories:
Cookies help us deliver our services. By using our services, you agree to our use of cookies.