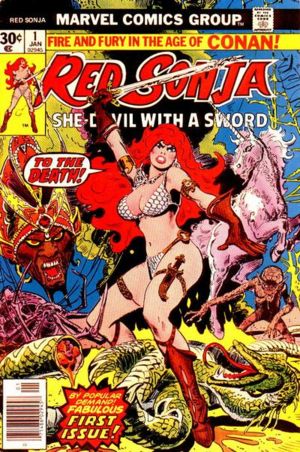 Red Sonja, the She-Devil with a Sword, is a fictional character, a low fantasy sword and sorcery heroine created by Roy Thomas and Barry Windsor-Smith. She first appeared in Conan the Barbarian #23 (Marvel Comics, February 1973). The character was loosely based on Red Sonya of Rogatino in Robert E. Howard's short story The Shadow of the Vulture (The Magic Carpet, January 1934), which Roy Thomas rewrote as a Conan story for the Marvel comic.

The character now appears monthly in her own series, as well as a series of mini-series and one-shots, all published by Dynamite Entertainment. The main Red Sonja series features a wide array of cover artists as well as the regular creative team of writer Michael Avon Oeming and artist Mel Rubi.

Red Sonja has become the archetypal example of the fantasy figure of a fierce and stunningly beautiful female barbarian in the utterly impractical Chainmail Bikini.

Red Sonja lived with her family in a humble house in the Western Hyrkanian steppes (modern Ukraine/Russia). When she had just turned 17 years old, a group of mercenaries killed her family and burned down their house. Sonja survived but she had been brutally raped by the leader of the group, leaving her in shame. Answering her cry for revenge, the red goddess Scathach appeared to her, and instilled in her incredible skill in the handling of swords and other weapons on the condition that she would never lie with a man unless he defeated her in fair combat.

Sonja has been featured in several novels by David C. Smith and Richard L. Tierney with covers by Boris Vallejo:

On television, Red Sonja makes an appearance on the Conan TV series, in the episode, "Red Sonja". She is on a mission to rescue a young wizard who was kidnapped. When one of Conan's partners sarcastically asks why the village didn't send their best warriors, Sonja replies, "They did send their best warrior, mulebrain!" She was played by Angelica Bridges.

She was played by Brigitte Nielsen in the 1985 film Red Sonja, which also starred Arnold Schwarzenegger as Prince Kalidor (a Conan clone)[1]. The film was directed by Richard Fleischer. It performed poorly at the box office, and was also widely panned by critics. But gain a cult following throughout the years from its VHS release.

A remake of Red Sonja is reportedly in the works. It was to be produced by Robert Rodriguez, directed by Douglas Aarniokoski, and actress Rose McGowan would have portrayed Red Sonja. Recent developments, however, indicate that the project is on ice.