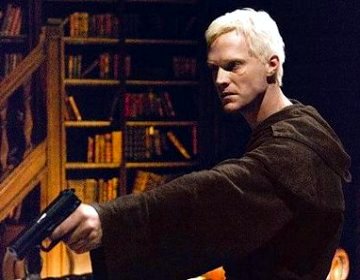 Murder is his specialty.

The treatment of albinism in fiction is often startlingly harsh. The condition seems to have been declared officially creepy with Moby Dick. The most common depiction of people with albinism in fiction is that of the inimical, violent villain, especially the hitman, assassin, sociopath or crime boss. A whole lot of them have names or nicknames that reference their albinism, if a name beyond "The Albino" is even bothered with. This should tell you about where this trope falls on the Sliding Scale of Creativity.

What is worse is that albinism in and of itself is treated as a distingushing mark of evil (in some real cultures it was) without any actual signs of albinism in the story. Got an albino, sharpshooting hitman? How? Albinism often causes impaired eyesight, especially at a distance. Got a scene where your evil albino chases the hero in a desert? Albinos have no UVA protection, and literally risk their skin by setting foot in a desert.

This can even apply in areas of the world where pale skin is actually considered attractive; the villains are just more likely to be physically attractive themselves. An albino, especially if they're female, will then often have other weird physical quirks. Red eyes fall under this category, as most human albinos have very pale blue eyes.[1] A few rarer variants of albinism in humans produce Purple Eyes, and, yes, even red or pink eyes because of enlarged blood vessels. Count on a fictional albino, though, to fall under Red Eyes, Take Warning.

Notable aversions and subversions of this trope should be listed under Heroic Albino.

Examples of Evil Albino include:

Retrieved from "https://allthetropes.org/w/index.php?title=Evil_Albino&oldid=1768651"
Categories:
Cookies help us deliver our services. By using our services, you agree to our use of cookies.