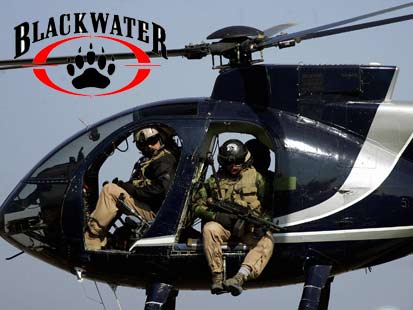 The most infamous modern example

Private Military Contractors (PMC) are mercenaries, soldiers and other combatants employed by a private company or other organization and fighting on behalf of clients. While such soldiers of fortune are regarded with wariness in most settings, they're generally considered distinct from criminal enforcers, mafia hit men, and the like.

In the real world, they are usually ex-soldiers with decent to slightly-above-average equipment from the United States—the largest company, and largest number of companies, are American. Other common national backgrounds are former Soviet Republics or South Africa. In fiction, though, they tend to get all the latest and most expensive vehicles and support equipment as well, and are often recruited and trained by the company itself. Fictional mercenary groups often hire unique individuals or groups of various special types of fighters: Ninja, Ronin Samurai, dishonored knights, mages, shapeshifters, and left-over warriors of defeated organizations, nations, or races that need to make ends meet. Some PMCs are just a Ragtag Bunch of Misfits.

These characters can be both heroic and villainous; in a conflict, they usually are allied with the richest party's faction, but sometimes have a strict honor code that prevents them from switching sides mid-battle. If they get too enthusiastic about their job, they may become Blood Knights and try to start a War for Fun and Profit. On the other hand, they do have to deal with the risk of their employers double-crossing them when the job's done. And if their clients run out of money before the fighting's done, things will get ugly in short order in one or more of many ways.

In recent years, there's come to be a distinction between a "mercenary company" and "corporate mercenaries", especially in Western (American) television and movies. The traditional mercenary who hires himself out (or himself and a dozen of his best buddies) is seen as somewhat honest, with at least a personal code of honor of some kind (even if it's just "do the job, get paid"); determined to accomplish the mission for which he has been paid and takes his reputation very seriously; and is scrappy yet skilled. This character is usually played moderately sympathetic, or at least as an Anti-Hero. They will typically have some attention given to their, quite possibly colorful, personalities.

In stark contrast, the "corporate mercenary" is usually just a Red Shirt of some kind, and the "character" takes the form of the PMC corporation itself. Corporate mercs are usually depicted as being up to no good, or are the hand-puppets of some shadowy organization which is itself up to no good. They are portrayed—when anything more than Red Shirts—as amoral, ethically-challenged, and professional but hardly ever inclined to argue with Corporate Headquarters. If former military, many will have been dishonorably discharged. They are almost never the "good guys" in recent years. Their parent company usually has a name based loosely or thematically on "Blackwater" in a No Celebrities Were Harmed Expy of that real-life PMC—examples include "Blackriver", "Red River", "Blackthorne", and "Starkwood".

Note that while the trope description uses the terms "PMC" and "mercenaries" interchangeably, in the Real Life the distinction between them is very much a Serious Business. This is because the international treaties that establish The Laws and Customs of War explicitly forbid the usage of mercenaries in warfare. While true mercs might be tolerated in practice, legally they are neither lawful combatants, nor non-combatants, and thus aren't eligible for the protection and respectable treatment as per Geneva conventions, for example. When captured, they are treated as a criminal gang at best, and at worst as complete outlaws.

Private military contractors are the way that some people try to weasel out of this ban on mercenaries. Despite largest of these companies employing armor, helicopters, light warships — sometimes just short of the full-fledged (if small) Air Force or Navy, on paper they are just your garden variety mall guards writ large, and they are not authorized to wage war on their own. Officially, these units may be employed only in some duties not involving actively engaging the enemy (though they can do this if forced), such as escorting convoys and guarding some civilian structures. In practice this mandate could be, and often is interpreted very broadly.

A PMC can provide a villainous Evil Army if one doesn't actually want to insult any real country's Armed Forces. If they're too much of an army, then they are an NGO Superpower.

Mercenaries are the basic, land-based version of this trope; at sea and in space, they're privateers operating under letters of marque.

A sub-trope of Hired Guns. Commonly a favorite industry of a Proud Warrior Race.

Examples of Private Military Contractors include:

Retrieved from "https://allthetropes.org/w/index.php?title=Private_Military_Contractors&oldid=1886956"
Categories:
Cookies help us deliver our services. By using our services, you agree to our use of cookies.