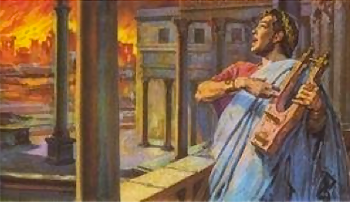 The downside of any hereditary monarchy is that every so often the throne is inherited by someone completely out of his gourd. It could be the lead plumbing (or complete lack thereof), the immortality elixirs (which all make use of mercury) or it's genetic (in which case you're in some deep trouble). Yet, despite the sovereign's obvious insanity, he is still given the full power and support of the State, with inevitably disastrous consequences.

The Caligula will be wildly irrational, violently moody, very intolerant of being told anything he doesn't want to hear, and probably afflicted with a god complex. He may indulge in renaming cities or even the entire country after himself. To do anything the Caligula finds displeasing is to inevitably be dragged off to a grisly death or worse. Of course, this could also happen to those who have not done anything at all. Due to their continuing close proximity to the Caligula, members of the Court (decadent or otherwise) will be the primary targets of his fits of rage. The Caligula is very definitely a Bad Boss. With any luck, thanks to The Starscream/Reliable Traitor/La Résistance, a conspiracy will eventually develop to remove the crazy sovereign from his post... permanently.

And while all of this is going on, the land over which the Caligula rules is rapidly going down the drain due to his neglect. At best. If he's a Glory Hound, he has an advantage over most: he can start wars.

This is not limited to sovereign heads of state. The Caligula can be anyone wielding great power within an organization while being completely nuts. Modern psychology has shown that the corporate business structure, if emphasizing financial profit to the detriment of anything else, can be especially prone to the appearances of individuals displaying at least a majority if not all of The Caligula's traits (so long as the person seeking profits is a psychopath at least, which is what the book seems to be saying.)

See Royally Screwed-Up for when the this type of character becomes a recurring family problem. Also see President Evil for when this guy is actually voted into office

The canonical alignment for many Caligulas is Chaotic Evil of the Type 4 variety, though some Neutral Evil examples exist. Lawful Evil Caligulas are possible (though rare enough to be almost unheard of) as any alignment is subject to insanity and Lawful Evil characters do enjoy establishing cruel laws and seeing their minions enforce them.

Named for what is probably history's best known whack-job, Roman emperor Gaius Julius Caesar Augustus Germanicus, better known as Caligula (Little Boots, his childhood nickname), a reference to the child-sized "caliga" warrior's sandals he wore as a small child when his father took him to watch a war; remembered for talking to statues, locking granaries, declaring war on Poseidon (and "winning", afterwards commanding his soldiers to collect seashells as war-prizes), making his horse a consul, and boning his sisters.

So what does it take to be the Trope Namer for insane royalty? The Emperor Caligula page has the details.

While Real Life examples are perfectly welcome, do try to save them until after the ruler in question is dead, deposed, or otherwise unable to strike back at you and/or All The Tropes.

Examples of The Caligula include:

Retrieved from "https://allthetropes.org/w/index.php?title=The_Caligula&oldid=1949398"
Categories:
Cookies help us deliver our services. By using our services, you agree to our use of cookies.