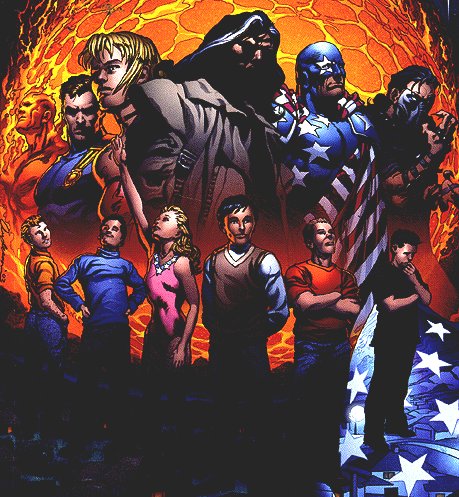 The year is 1969. A single comet falls from the sky, looking like God's finger. What finger of God it was, Poet doesn't know. However it then explodes/disappears in a flash that lights the sky above the small American town of Pederson. Poet is one of the 113 specials, the children that were ready to be born when that flash occured and gave them powers that only ruin their lives. Each has a power regardless of their personality, not that they want them.

The story is told by Poet, about his friends, the other Specials, and how they began and ended over a period of decades in flashbacks and flashforwards.

The comic was published from 1999-2005. J. Michael Straczynski wrote it, and it has been speculated how much The 4400 and Heroes drew from it.

Tropes used in Rising Stars include:
Retrieved from "https://allthetropes.org/w/index.php?title=Rising_Stars&oldid=1744847"
Categories:
Cookies help us deliver our services. By using our services, you agree to our use of cookies.