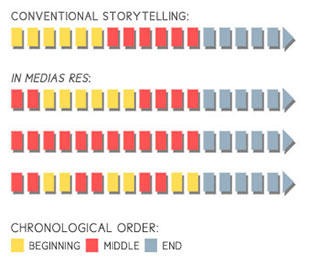 An approximation. You should see the Pulp Fiction timeline.

"Into the middle of things"—taken from the poet Horace, this refers to the poetic technique of beginning a narrative poem at a late point in the story, after much action has already taken place. Homer makes use of this in The Iliad, making this trope Older Than Feudalism.

When used in TV it's generally a preamble to a Flash Back, which falls under How We Got Here—where the action starts at the middle or end of the story and quickly flashes back to the real beginning.

In medias res is a quick and easy way to have an action sequence at the beginning of an episode; for this and related tricks, see Action Prologue. Both in medias res and Action Prologue are also quite common in Video Games for the same reason, and to allow the player to get into the actual gameplay fairly quickly without them having to sit through long expository cut-scenes.

Frequently, the first act of an in medias res opening will end with a situation that looks like it will lead to the death of a major character. It usually doesn't.

See Lost in Medias Res for what happens when this is done badly.

Often inspires someone later on to remark: "This is where we came in!"

Examples of In Medias Res include:

Retrieved from "https://allthetropes.org/w/index.php?title=In_Medias_Res&oldid=1884343"
Categories:
Cookies help us deliver our services. By using our services, you agree to our use of cookies.