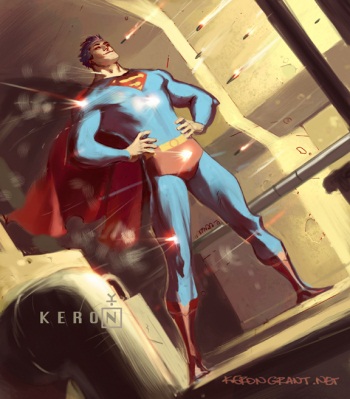 Because it's worked so well in the past, right?

While some believe that a villain who doesn't realize he can simply shoot the hero is stupid, the even stupider type is the one who does try it on a certain type of hero.

The tendency for Mooks, the military, and other assorted gunmen to repeatedly attack a monster, alien, or Superhero with weapons that they themselves should know won't work from either personal experience or at least from watching the news. What's worse, they'll simply stand in place and try the same thing over and over again as the hero or other threat to their safety advances slowly towards them, never trying something else or turning tail to run until the last possible second.

One often has to wonder how much money repeat offenders of this Trope waste on ammunition. Sometimes it's explained as desperation, but most times, they really should know better and just accept the fact that their foe is (sigh) Immune to Bullets. It makes a touch more sense with characters who have protective devices like Wonder Woman's bracelets or Captain America's shield. At least with those characters, the Mooks can realistically think they have a chance at hurting them if only they could get that lucky shot, which never happens.

Named for the countless times crooks and other low-level threats have attempted to stop Superman by shooting him with regular guns. Often they'll even throw their empty gun at him once they've emptied the magazine, to no effect. (Though old live-action Superman shows would sometimes have him duck or otherwise dodge the thrown prop guns) Particularly dense examples will then pull out another gun and try again, or pick up a chair and smash him over the head with it... And then do it AGAIN and again until Supes has had his fun and proceeds to twist them up like a pretzel.

Somewhat justified in circumstances where the monster of the week just has lots of hitpoints, and in real life it would also be unlikely for the world's collective military to take one swipe and announce: "Oh! He's obviously Immune to Bullets! How could we been have so Genre Blind?"

Check out "Real Life" below for some examples where shooting Superman is still the best option.

Examples of Shooting Superman include:

It gets even worse in the Marineford Arc. After Luffy freed Ace, the Marines proceed to shoot Luffy and Ace. Keep in mind that Ace can turn into intangible fire, so while bullets just bounce off Luffy, they simply pass through Ace.

This is subverted somewhat in the new series... there's an episode where armor successfully shoots down a spaceship hovering over London, and another where the U.N.I.T. forces make a good showing against Sontarans.

Rorschach then continues to shoot Deadpool throughout the series. However, he never really seems to expect it to have an affect (though once he caused impact by shooting Deadpool's guitar...). He usually just does it to shut Deadpool up.

Retrieved from "https://allthetropes.org/w/index.php?title=Shooting_Superman&oldid=1861064"
Categories:
Cookies help us deliver our services. By using our services, you agree to our use of cookies.