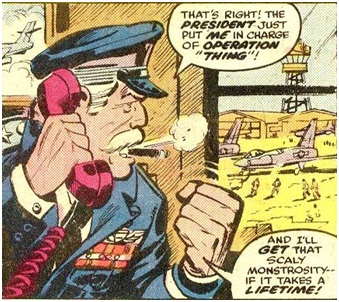 Doctor Doom? The Green Goblin? The real menace is those damn superheroes![1]

A hard, grizzled military man, promoted to the highest echelons of power because of his exemplary record. At some point, however, something changed.

Maybe the war he'd been fighting for his whole life ended abruptly. Maybe he's haunted by his past in the field, or by real ghosts. Maybe he's just flipped under the strain of command. At any rate, he's obsessed with a specific enemy, and will take any means to rally the troops to battle against this foe, "Enemy X".

Monster attack? It was Enemy X. Terrorist attack? Gotta be Enemy X. Local superhero? Obvious spy for Enemy X. Everything quiet on the front? Enemy X is just lulling us into complacency so he can strike when our guard is down. Does it look like Enemy X is trying to surrender? It's a trick! Shoot'em while they're distracted! Wait, you say Enemy X was defeated last year? Sure, that's just what they want you to think!

If they even bother trying to explain their attack objectively, they will likely characterize the enemy as an inherently evil and eternal foe, and follow it up with Do Unto Others Before They Do Unto Us. After the fact, you'll be lucky if you get any more than a smug I Did What I Had to Do. As for making him stop, he will only listen to the orders of the highest superiors like the Joint Chiefs of Staff and more often only the The President himself, and then pout at not having his way.

Enemy X comes in a host of forms. Nazis, Commies (once common but now Dead Horse Trope),[2] Nazi Commies (because they're the same thing, of course), aliens, robots, Terrorists Without a Cause, Muslims, the undead, teddy bears, marauding foreheads, fluoride...

A character type that is an aftereffect of the Cold War. It's officers like him that turn the The Cavalry into a case of Armies Are Evil. Basically, who The Brigadier becomes when you sap and impurify his precious bodily fluids.

Named for Air Force General Jack D. Ripper, the patriotic madman who triggered World War III in the film Dr. Strangelove. He launched his wing of B-52's on an irrevocable attack mission because of a paranoid delusion involving Communists, fluoride, and his "precious bodily fluids". His portrayal (along with that of the slightly milder Gen. Buck Turgidson from the same film) set the example for all to follow. Ripper is, of course, named after a certain Victorian serial killer.

May or may not be a Four-Star Badass, depending on how badass he is.

A Sub-Trope of Insane Admiral; for the grunt version, see Sociopathic Soldier. Compare with Well-Intentioned Extremist and Colonel Kilgore. Contrast with The Brigadier and Reasonable Authority Figure. While you're at it, you better pray that a General Ripper doesn't launch a coup d'etat and become President Evil. Can very easily become the fate of He Who Fights Monsters.

No real life examples, please; while this is Truth in Television, we don't need an Edit War (No pun intended).

Examples of General Ripper include:

Retrieved from "https://allthetropes.org/w/index.php?title=General_Ripper&oldid=1933728"
Categories:
Cookies help us deliver our services. By using our services, you agree to our use of cookies.