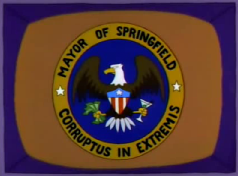 On the bright side, he is honest.

A Sleazy Politician exemplifies the worst stereotypes of politics; they take bribes, engage in blatant hypocrisy, face constant personal scandals and are generally unpleasant people to be around. Often, they are based on caricatures of real-world politicians, or amalgams of them—especially ones that fall into Acceptable Political Targets. They tend to be shown with almost no charisma, too, which tends to make you wonder how they got elected in the first place. When taken to extremes, they will often have No Party Given, though they can also be used as a Strawman Political against one specific party, ideology, or against government in general. See also Corrupt Politician and Obstructive Bureaucrat.

No real life examples, please; there is a very high risk of such examples devolving into political debate, which is not the sort of entertainment this wiki is really looking to provide.

Examples of Sleazy Politician include: