The Thick of It 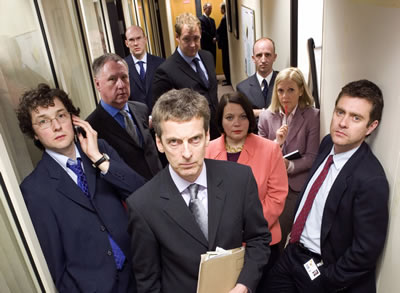 Welcome to Whitehall. Please leave your principles at the door.

"I'm a man of principle: I like to know whether I'm lying to save the skin of a tosser or a moron."
—Malcolm Tucker

Satirical British Government Procedural produced by Adam Tandy and directed by Armando Iannucci. Debuted in 2005. It is styled as a fly-on-the-wall view of the inner workings of British politics, with natural-sounding, partly improvised dialogue and the use of shaky handheld cameras. Intended to be as realistic as possible, the show employs several Whitehall insiders and every aspect is meticulously researched, from the office decor to the levels of swearing.

There is a lot of swearing.

The show is essentially a 21st Century update of Yes Minister, reflecting the changes the British political system has been through in the decades between the two shows, in particular the culture of spin ushered in by New Labour's Slave to PR government. While the earlier show commented on the power of unelected civil servants, the later show portrays the government's spin doctors and the media as the most powerful influences. The show also has a distinct anti-West Wing sensibility, sitting at the opposite end of the Sliding Scale of Idealism Versus Cynicism: don't expect sharply-dressed idealists doing their best to serve their voters, this show is all about venal politicians, incompetent civil servants, and bad suits.

The show is set in and around the fictitious Department of Social Affairs and Citizenship, the least glamorous and most troublesome of all the Cabinet offices. Created as a "Super Department" with a vague and confusing wide-ranging and varied remit, it handles the boring stuff none of the other departments can be arsed with everything from housing to crime statistics.

The first two series, each comprising three episodes, star Chris Langham as the hapless Minister for Social Affairs, Hugh Abbott MP. They were followed by two hour-long specials- Rise of the Nutters and Spinners and Losers- which centred on the Prime Minister's enforcer Director of Communications Malcolm Tucker, played by Peter Capaldi, and the issue of the Prime Minister's impending resignation. The third series introduced Nicola Murray MP, played by Rebecca Front, as Hugh Abbott's replacement following a Cabinet reshuffle. The fourth and final series aired in 2012.

A spin-off movie, In the Loop, was released in 2009. An American version, titled Veep (being set in the office of the Vice President) aired on HBO in spring 2012.

This show has Loads and Loads of Characters: you can read more about them and how they fit into the British Political System over at the show's Character Sheet.

Very popular in Whitehall, which can only be a bad thing for the UK...

Tropes used in The Thick of It include:

Malcolm Tucker: "You should try the chicken salad! If I'm lucky you'll get salmonella."
Julius Nicholson: "Now that is amusing, Malcolm, that is very funny."

Malcolm: How does that work? Does that mean I'm the semi-talented songwriter and you're the fucking loutish prick? That's a lovely analogy.

Jamie: "Have you seen this?"
Malcolm Tucker: "No, I haven't seen that. I'm the senior press guy for the government of Great Britain and Northern Ireland, I don't look at the newspapers, that's fuckin' news to me!"

Malcolm Tucker: Why the fuck didn't you talk to me you STUPID CUNT!! How the fuck am I supposed to do my job if I don't know what THE FUCK IS GOING ON!? You're a FUCKING PRICK!!

Olly Reeder: "When I met you this morning I thought you were the nice Scot"-

Olly Reeder: It's like he's been to the vet and had his knackers done.

Nicola Murray: "You haven't had this much fun since you went to Cadbury World."

Peter Mannion: "...who should come rolling along the corridor but Malcolm Tucker, the man who was once referred to as 'The Gorbals Goebbels'?"
Stewart Pearson: "Oh don't do a joke Peter, don't do a joke..."

"We just had to give Malcolm as much as possible to say, he gets [through] his words so quickly. We have to keep feeding the monster."

DoSAC staffer: "Could you stop swearing please?"
Malcolm Tucker: "I'm really sorry, you won't hear any more swearing from us, you MASSIVE... GAY... SHITE! FUCK OFF!"

"I said to Armando, 'Why do you always get me to run about?' And he says, 'Because you’ve just got a funny run'" -- Peter Capaldi
"One of the things that the Thick Of It writers are very good at is taking our own physical defects and flinging them right back at us" -- Chris Addison
"They're like bullies, basically" -- Will Smith, who plays Opposition aide Phil.

Malcolm Tucker: "Fuck me! This is like a clown running across a minefield!"

Jamie: "You take the piss out of Jolson again and I will remove your iPod from its tiny nano-sheath and push it up your cock. Then I'll plug some speakers up your arse and put it on to shuffle with my fucking fist. And every time I hear something that I don't like- which will be every time that something comes on- I will skip to the next track by crushing your balls."

Malcolm Tucker: "I just wanted to say to you by way of introductory remarks that I'm extremely miffed about today's events, and in my quest to try to make you understand the level of my unhappiness I'm likely to use an awful lot of what we would call violent sexual imagery- and I just wanted to check that neither of you would be terribly offended by that."

Stewart Pearson: "Ah, Peter! Glad we could hook up! I just wanted to take a few turns with you on the ideas carousel..."
Peter Mannion: "Oh, you mean you wanted to have a chat?"

Hugh Abbott: "I'm going to go in to the PM and tell him straight up: this bill is a load of old bollocks!"
Glenn Cullen: "No you're not."
Hugh Abbott: "No I'm not, but it'd be great if I did wouldn't it?"

Olly Reader: "I'm not being horrible but are you actually autistic?"
John Duggan: "No, I'm not... but you'd be surprised how many people ask me that!"

Olly Reeder: "For a man who brought us back into power, he's not very imposing is he? He's like a Lego policeman."

Jamie: "You couldn't organise a bumrape in a barracks."
Malcolm Tucker: "Au contraire..."

Peter Mannion: Oh great, what did Mr. Political-Correctness-Gone-Boring have to say?

Phil Smith: "It's a dark suit and it's only lukewarm, I STILL WIN!"

Malcolm Tucker: (to Cliff Lawton) You have had a good innings! You have been here for eighteen months!

Olly Reeder: "Are you out of the loop?"
Malcolm Tucker: "Fuck you Andy Pandy, I am the loop..."

Nicola Murray: "That's what this is all about for you isn't it? Fighting and fucking power! Does it never occur to you that your poisonous, male obsession with conflict is making people despise politics?"
Malcolm Tucker: "Spare me your fuckin' psycho-fanny!"

"Wake up and smell the cock!"

Malcolm Tucker: "Some people, they just fuckin' love to hate. Some people fuckin' walk around the fuckin' Garden of Eden fuckin' moaning about the lack of fuckin' mobile recption! These are the kind of fucks who watched Mandela walk to freedom and said 'Is Diagnosis: Murder not on the other side'?"
Cal Richards: "It will... be... FUCKED!"

Steve Fleming: "Right now, you're all emerging from the cellar...pleased, that the beatings have stopped...scared, of what the future might hold..."

"You are a naughty bastard..."

Olly Reeder: "This inability to talk without using Lord of the Rings metaphors is one of the very many reasons we could never be friends."

Malcolm Tucker: I know what people say to you right. They say: "We hate you. I hate you. I hate you. I hate you. Everybody hates you." So fucking what? Some people, they just fucking love to hate. Some people, they'd fucking walk around the fucking Garden of Eden, fucking moaning about the lack of fucking mobile reception! These are the kind of fucks who watched Mandela, fucking Nelson Mandela, walk to freedom...and said "is Diagnosis: Murder not on the other side?" So we fucking forget about them. JB, Cal Richards, and their hordes of fucking robots - they're coming over the hill. And all you have to do now is bend down, pick up any fucking weapon - AND TWAT THE FUCKERY OUT OF THEM! LET'S GET OUT THERE, AND LET'S FUCKING KILL THEM! LET'S SET FIRE TO TEARS! LET'S GO!

Cal "The Fucker" Richards: This government's run this country into the ground - this used to be a green, and pleasant land, now...it's the colour of the fucking BBC weather map. It looks like anaemic dogshit. This government is maimed, but it can't be shamed - IT. WILL. BE. FUCKED! Okay, let's get going...what do I call for an outside line? Is it nine, because that's what it is everywhere else?

Malcolm Tucker: Where do you learn to speak like that? Is there a special school that only you and Brian Sewell go to?

Olly: (trying to rewrite an entire speech in an hour) "It's The West Wing!"
Nicola: "You're not Josh, Olly, just write the fucking speech."
Olly: (muttering) "I fucking am Josh..."

"People don't like their politicians to be comfortable. They don't like you having expenses, they don't like you being paid, they'd rather you lived in a fucking cave." - Malcolm Tucker
"...and a Ted Baker suit. We were going to go for Vivienne Westwood or Paul Smith but it was just too expensive" - Stewart Pearson

Terri Coverly: "I'm just going to take my media hat off..."
Nicola Murray: "I honestly never thought you had one."

Peter Mannion: Christ, she's actually a bit creepy, it looks as if she's going to launch herself at us at any second.

Glenn Cullen: You've got a contract! You're on the last chopper out of Saigon, I'm having it up the arse with Ho Chi Minh!

Malcolm: I am the heart. I am the ventricles!

"Malcolm... if you could just come to the toilet with me..."

"Lots of love via Glenn, and nighty-night."

"Malcolm doesn't take holidays, he has to keep moving or he dies - he's like a shark or Bob Dylan" - Glenn Cullen
"Lying on your back getting fed nutrients through a tube? That's my idea of a fuckin' holiday" - Malcolm Tucker

"Have you got all your stuff ready for your official Lording ceremony? Have you got your mink thong and your ermine colostomy bag?" - Malcolm Tucker

Nicola Murray: Oh great, someone's just sent me a YouTube clip, which is me in front of the "I AM BENT" sign randomly intercut with bits from Family Guy. It's not even funny! Why do people fucking do that on YouTube?