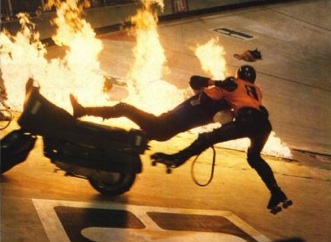 In The Future, life is cheap. No better way to show that than with some good old-fashioned violent spectator sports, where fatalities are a very real possibility every single game, if not the major selling point. Essentially, a Blood Sport is a Deadly Game version of a modern spectator sport.

Of course, this trope is not limited to the future; gladiator-style entertainments often pop up in the Backstory of a Barbarian Hero, for instance. This is historical Truth in Television, of course; formalized bloodsports have been around since at least the ancient Greek Olympic Games, and informal ones most likely go further back than that

Exactly how the sport is dangerous varies. It could be as simple as something extremely risky, such as racing at supersonic speeds, a more mundane sport with the added bonus that the players are allowed/encouraged to physically attack each other, or flat out gladiatorial matches of some kind where the entire goal is for one side to kill or seriously maim the other. Apparently, mankind forgot the whole thing about the sanctity of life somewhere in the past nineteen minutes.

Usually, the deaths will be of the many young rookie players, but sometimes, a veteran slips up, or a longtime feud will come to a sudden, violent end. Frequently, the players are Condemned Contestants and their violent deaths are part of the attraction.

These sports may form the central part of the story, but in many cases, they're just shown or described as a way of letting the audience know just how messed-up this world has become.

A slightly more optimistic variation is where the Blood Sport has come around as an alternative to actual wars. In many cases, it will often be actual fighting, only more ritualized. Of course, if you thought sports was Serious Business before...

Also common in many martial arts stories, with pit fighting and Kumite-style tournaments where people fight to the death.

See also Vehicular Combat for a type commonly found in videogames. I Know Madden Kombat is the inversion of this trope, kinda sorta; sports skills used as combat arts off the field.

Not to be confused with Bloodsport, the Jean-Claude van Damme film, though the eponymous tournament definitely is one.

Examples of Blood Sport include:

Retrieved from "https://allthetropes.org/w/index.php?title=Blood_Sport&oldid=1631947"
Categories:
Cookies help us deliver our services. By using our services, you agree to our use of cookies.