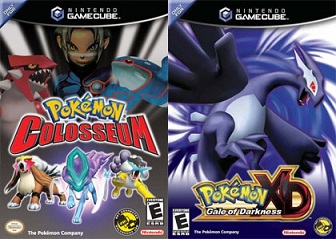 Pokémon gets Darker and Edgier.

Pokémon Colosseum and Pokémon XD: Gale of Darkness are spinoffs of the incredibly popular Pokémon franchise for the Game Cube. Produced by Nintendo and Pokémon Company-owned Genius Sonority and released in 2003 (2004 stateside, XD in 2005), the games are notably Darker and Edgier than the rest of the series. The series takes place in the desert region of Orre, where there are no wild Pokémon to be found. So how do you accomplish the usual task of catching and raising your own small army of adorable little forces of nature then? You steal them, mainly from the bad guys.

The main character of Colosseum, Wes, is a top operative of an organization known as Team Snagem. Using a device known as a Snag Machine, this gang is infamous for "snagging" Pokémon from Trainers all across Orre. All is well until Wes pulls a spectacular double cross on the organization, stealing their only portable Snag Machine and blowing up Snagem's headquarters. Upon reaching the town of Phenac, he stops two thugs in the middle of kidnapping a girl called Rui: a girl who can perceive a strange black aura around certain Pokémon that indicates that they have been corrupted into heartless fighting machines known as "Shadow Pokémon". She pleads with Wes to use his "snagging" expertise to help her purify all the Shadow Pokémon and uncover the conspiracy behind their creation.

Pokémon Colosseum is notable for being the first fully-3D Pokémon RPG (with a storyline and everything!) and for some unique gameplay features: such as the fact that every fight in Orre is a double battle, requiring a whole new set of tactics from regular play.

The sequel, Pokémon XD: Gale of Darkness, was released the following year. XD scaled things back a few notches by replacing the Anti-Hero main character with a Kid Hero called Michael and cleaning up Orre so that it's not quite as gritty as before. The plot this time revolves around "XD001": a Lugia transformed by the Cipher crime syndicate into a Shadow Pokémon supposedly immune to purification. XD added a few new features, such as "Poké Spots", small areas where you could lure and catch wild Pokémon and a method for mass purifying Shadow Pokémon, Shadow Pokémon now have a much greater variety of moves than just Shadow Rush.

Tropes used in Pokémon Colosseum include:

Retrieved from "https://allthetropes.org/w/index.php?title=Pokémon_Colosseum&oldid=1740375"
Categories:
Cookies help us deliver our services. By using our services, you agree to our use of cookies.