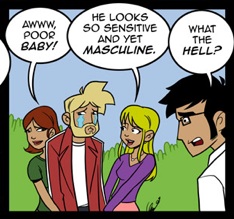 One of the easiest ways to show that a male character has fallen into depression is to show him with unkempt stubble or sometimes even a full beard after a Time Skip.

Happens to be Truth in Television, of course. A common symptom of depression is loss of interest in personal appearance; and in men this might cause them to quit shaving. This is frequently accompanied by the Drowning My Sorrows trope.

Some observant shows may justify this with Jewish characters, because, by Jewish law, men may not shave for thirty days as means of mourning.

Contrast Perma-Stubble, which is the mark of a Badass. Also contrast with Wangst, which is telling, while this trope is showing. Compare Perma-Shave, where no facial hair grows.

Examples of Beard of Sorrow include:

Retrieved from "https://allthetropes.org/w/index.php?title=Beard_of_Sorrow&oldid=1880913"
Categories:
Cookies help us deliver our services. By using our services, you agree to our use of cookies.