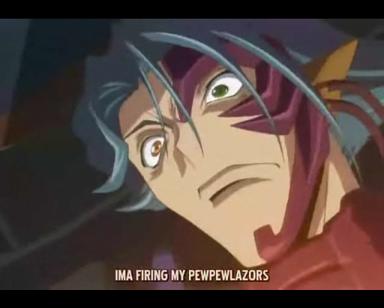 What happens when subbers get bored.[1]

So your favorite anime is coming over from Japan. You've followed this show almost religiously using fansubs and are interested in how the localizers will handle it.

What's this? The Double Entendre dialogue and UST has been replaced with No Hugging, No Kissing. That one character who always launched a Cluster F-Bomb is using Unusual Euphemisms instead! Surely the American distributors are to blame for this Macekre!

They aren't. The show is a more-or-less faithful translation of the original. The dirty jokes and language of the fansub was added by the fansubber in an attempt to "improve" the show, or to cover up the fact that they're not as fluent in Japanese as they want us to think.

This also happens frequently to official releases that want to get out of the Animation Age Ghetto as fast as possible by adding as much family-unfriendly material as they can to the subtitles. The translator wanted to Spice Up the Subtitles.

Much of this confusion is caused especially by the Japanese expletive kuso. This word is an all-purpose expletive, and as such can be translated to many things, including, but not limited to: "rats", "darn", "crap", "shit", "fuck", "dammit", "damn", "damn you", "oh shit", "god dammit", "crisse de tabarnak", "drat", "crud", "not good", "this is bad", "oh no", or even, in some cases, "help" (when you don't actually expect it). Needless to say, fansubbers will usually utilize the more explicit ones, whereas dubs tend to lean on the tamer side.

Examples of Spice Up the Subtitles include:
Retrieved from "https://allthetropes.org/w/index.php?title=Spice_Up_the_Subtitles&oldid=1501158"
Categories:
Cookies help us deliver our services. By using our services, you agree to our use of cookies.