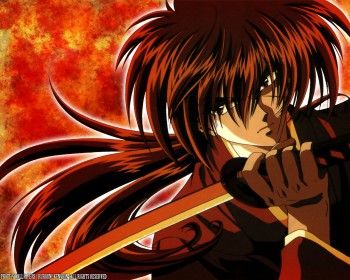 A manga by Nobuhiro Watsuki, its name translates as "Kenshin the Wanderer", but it is also known as Samurai X after Columbia Pictures renamed it for their anime releases (which was later co-opted by ADV Films for their release of the movie and OVAs). Watsuki, being a major fan of the X-Men comics (the characters from which he based a lot of the cast's designs on), heartily endorsed this title translation.

It is 1878, a peaceful time after the troubles of the Meiji Restoration and the Satsuma Rebellion. Kamiya Kaoru, the spirited and young head of the Kamiya Kasshin kendo school, is having trouble fending off a couple of no-gooders that want to take over the dojo. Through sheer luck, she gets a vagrant swordsman she mistook for a killer to help her against the baddies.

To her great surprise, it turns out that her initial assessment of this vagrant wasn't, strictly speaking, mistaken after all - the swordsman turns out to be Himura Kenshin, who used to be known as the Hitokiri Battousai ("the quick-drawing assassin") during the turbulent years of the Meiji Restoration when he acted as an assassin for the revolutionary anti-shogunate forces. Now he atones for his past sins wandering around and righting wrongs without killing anyone.

Later on, the Kamiya Kasshin dojo adopts two more hangers-on: Sagara Sanosuke, a brash youth with spiky hair and phenomenal physical strength; and Myoujin Yahiko, ex Street Urchin who evolves into a Kid Samurai. We also have Takani Megumi, a beautiful woman who knows her medicine quite well and mothers them all. This is good, as Kenshin's foes from his murky past tend to turn up with distressing frequency.

One of the most popular series of the late 90's, Rurouni Kenshin is notable for defying several established Shounen conventions. It features an older hero (Kenshin is 28 at the start of the series, which is ancient by shonen protagonist standards -- not that he looks it) who is world-weary and tired of fighting, instead of a wide-eyed young lad eager for adventure. Other themes which are rarely seen in the genre, such as politics and serious romance, pop up as well. This is what contributed to the legendary Multiple Demographic Appeal of the series, which crossed age, gender and national boundaries with equal ease.

The series was followed by two OVA's, one a prequel (Tsuiokuhen, a.k.a. Samurai X: Trust & Betrayal) and the other (Seisoushen, a.k.a. Reflections) a sequel. The entire Sony dub of the anime is available to watch on Hulu under Samurai X.

Watsuki announced that he will be working on the series again, another manga series will start on May 2, 2012. Rurouni Kenshin Cinema-ban will be an adaption of the Live-Action movie; it will be a monthly run at Jump Square magazine, a short one since he plans to end in within the same year.

And as of recent years, rumors are swirling of a revival. Turns out this will take the form of a new PSP game, a Japanese-produced live-action movie, and a new OVA series remaking the Kyoto arc.

Tropes used in Rurouni Kenshin include:

Retrieved from "https://allthetropes.org/w/index.php?title=Rurouni_Kenshin&oldid=1962297"
Categories:
Cookies help us deliver our services. By using our services, you agree to our use of cookies.