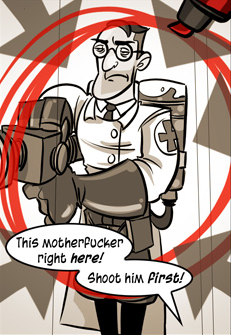 GET BEHIND ME, DOKTOR!

In Real Life war, medics are supposed to be special: The Laws and Customs of War, specifically the Geneva Convention, dictate that medical personnel are non-combatants and they're not allowed to attack you; shooting one (or vice versa) is a serious war crime. So is impersonating one so that the enemy won't shoot you.

For tactical reasons, there's no real point in shooting at medics either; in combat, a downed soldier remains down for the current battle (with medical treatment and recovery occuring slowly over the days, weeks and even months that follow), and medics are also trained to treat the enemy as well as their own comrades if at all possible, provided that they aren't presenting a threat. In fact, you usually want to leave medics alone since retrieving a fallen comrade usually requires the help of an additional person, so this puts at least one other potential enemy out of action, making the fight easier.

But if you're in a Video Game, you can forget all about that, because videogame medics are magical.

Unlike Real Life, a video game medic will magically heal critically wounded soldiers back to full combat effectiveness in a matter of seconds - and in many cases, reviving soldiers Back from the Dead isn't any more difficult. This makes an enemy healer a primary target, because when left alone, they will ultimately start reviving and healing your enemies almost as fast as you can take them out; enemies accompanied by healers effectively become Nigh Invulnerable so long as the healer is present, so if you want to have any hope of winning, you must Shoot The Medic First.

Just be prepared for an occasional Roaring Rampage of Revenge from the medic's True Companions, or that the boss may spontaneously Turn RED (film) when he learns his healer has been taken out.

When medics won't put up with getting attacked first and actually start fighting back, they become a Combat Medic.

Examples of Shoot the Medic First include:

Retrieved from "https://allthetropes.org/w/index.php?title=Shoot_the_Medic_First&oldid=1923387"
Categories:
Cookies help us deliver our services. By using our services, you agree to our use of cookies.