Everything About Fiction You Never Wanted to Know.
(Redirected from Stranglehold)
Jump to navigation Jump to search 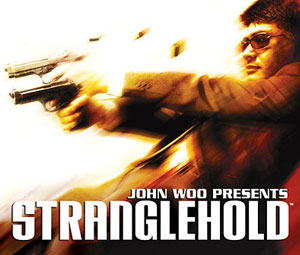 Honor is his code. Vengeance is his mission. Bloodshed is his only option.

A Hong Kong policeman is killed in what looks like a regular murder by The Triads and the Tongs and it's a personal challenge for Inspector "Tequila" Yuen investigating the case. Before long, his star crossed love interest Billie and her daughter Teko are kidnapped by The Mafiya, too. Much Heroic Bloodshed ensues.

John Woo Presents Stranglehold is a 2007 Third-Person Shooter that is both an affectionate pastiche of the classic Heroic Bloodshed movies and a sequel to the probably most famous example of the genre, Hard Boiled. And it was produced with John Woo participating, while Chow Yun-Fat reprises his role as Tequila. As you may have expected from that lineup, the game is much more about marrying Rule of Cool to Rule of Fun and trashing each next level in impossibly awesome ways than anything else.

Recently, rumors have surfaced that John Woo will be directing a film adaptation of the game. Talk about full circle.

Tropes used in Stranglehold (video game) include:
Retrieved from "https://allthetropes.org/w/index.php?title=Stranglehold_(video_game)&oldid=1084973"
Categories:
Cookies help us deliver our services. By using our services, you agree to our use of cookies.