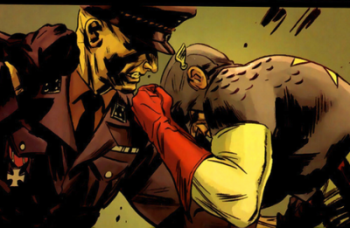 Not quite your standard Nazi mook.

The higher a character is in his hierarchy, the better he is in a fight. This goes double for non-protagonists.

In the real world, soldiers are promoted for their leadership and management skills, not for their fighting prowess. If anything, senior ranking soldiers tend to be worse at fighting than the rank-and-file, because they are generally older and are not expected to personally engage the enemy and thus train less.

And yet, in many works of fiction, especially videogames, the opposite is true. The higher someone's rank, the deadlier he is in personal combat. A sergeant can kick a grunt's ass. A captain can kick a sergeant's ass. A general can kick everybody's ass. The "boss fight" at the climax of a game will often be against the literal boss of the enemy army.

Common recipients of this Trope includes General Ripper, Colonel Badass, the Diabolical Mastermind, the Corrupt Corporate Executive, The Evil Emperor, The Evil Prince and President Evil—but, on the other hand, the Rebellious Princess benefits from this one enough to be a competent mage despite her sheltered life. Similarly for the President Action. The Mad Scientist is more likely to go One-Winged Angel, but he can still invoke this Trope if he's got a large enough cadre of mutants, henchmen, and/or combat robots at his disposal. The Evil Overlord will always take advantage of this.

A strange result of this Trope happens in games with named and similar enemies where more dangerous versions of enemies the player encountered earlier have a higher rank in their name, often resulting in the player fighting entire squadrons consisting entirely of generals near the end of the game with no lower ranked units in sight.

The Almighty Janitor is an inversion, who is far more powerful than his lowly rank would imply. The Desk Jockey is a different inversion, who has been promoted out of the field into authority. Compare You Can Barely Stand. See also Large and In Charge, Izchaks Wrath, and Distribution of Ninjutsu. Not to be confused with Asskicking Equals Authority, though it can explain this trope.

Examples of Authority Equals Asskicking include:

Retrieved from "https://allthetropes.org/w/index.php?title=Authority_Equals_Asskicking&oldid=1835041"
Categories:
Cookies help us deliver our services. By using our services, you agree to our use of cookies.