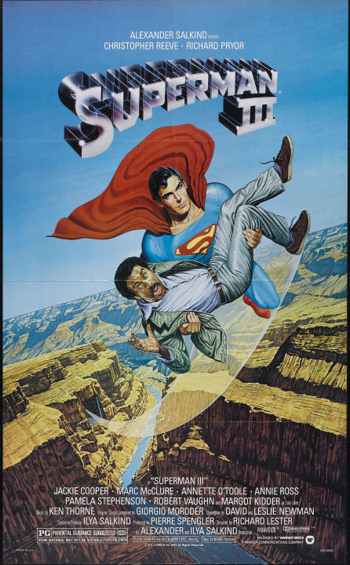 Superman III, released in 1983, is the third of the Superman films starring Christopher Reeve.

The Man of Steel's mythology is further explored as Clark returns to Smallville for his high school reunion and meets back up with his old friend, Lana Lang (whose actor, Annette O'Toole, went on to play Ma Kent in Smallville). The main plot of the film involves heavily-promoted co-star Richard Pryor as Gus Gorman, a bumbling-but-brilliant computer programmer who falls in with the forces of evil -- as epitomized by business executive Ross Webster (Robert Vaughn) -- and ends up helping said forces of evil turn Superman evil and create a supercomputer which could be used to conquer the world.

Superman III was directed by Richard Lester (who completed Superman II after Richard Donner was fired), and its emphasis on comedy was (and still is) generally derided as unwelcome and unnecessary -- although the serious battle scene between Superman and Clark Kent (as the hero struggles against his new, darker nature) is widely considered the highlight of the film. Richard Pryor's performance is also a "love it or hate it" affair, as he was an avowed fan of Superman and tried his best to do the film justice (because if comedy is going to be inserted into a film, it's best left to an actual comedian).

Tropes used in Superman III include:
Retrieved from "https://allthetropes.org/w/index.php?title=Superman_III&oldid=1888111"
Categories:
Cookies help us deliver our services. By using our services, you agree to our use of cookies.