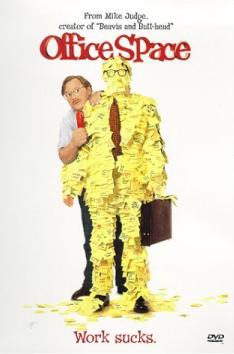 Heeeeey, Troper. What's happening? Yeah, I'm gonna need you to go ahead and describe Office Space here. If you could get that done by Monday, that'd be greeeeeaaaat. Mmkay?

Then Peter gets de-stressed by a dose of hypnotherapy and stops caring about his job. Soon after that, some outside consultants interview him, trying to find people to lay off. Instead of puffing up his importance, Peter tells them exactly how the bloated bureaucracy of the company stops him from ever doing anything. The consultants, of course, take this as sheer brilliance. Peter is fast-tracked for a promotion, but also discovers that two of his only friends, Michael and Samir, are going to be getting the axe. When he shares the news, the three decide to do the only logical thing -- rob the company.

They come up with A Simple Plan, but fail to notice a few very important details, and everything starts to spiral out of control.

Office Space is the Trope Namer for:
Tropes used in Office Space include:
Retrieved from "https://allthetropes.org/w/index.php?title=Office_Space&oldid=1830156"
Categories:
Cookies help us deliver our services. By using our services, you agree to our use of cookies.