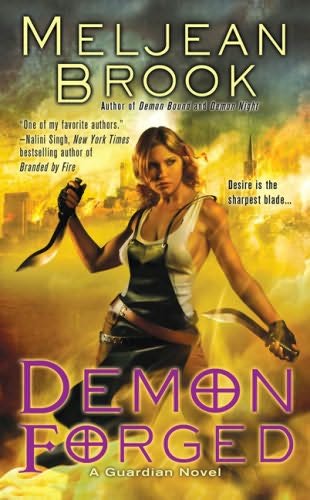 The Guardians is an Urban Fantasy Romance series written by New York Times bestselling author Meljean Brook. The series will have eight books, with the final book being released in 2012. Each novel focuses on the romance of an individual couple, and advances the overall story arc of the war between good and evil.

During the first war of the angels, Lucifer led a rebellion against God and was defeated. The angels who fought with him were cast into Hell as demons; the angels who choose neither side were cast down to Earth as nosferatu. Demons, nosferatu and angels are bound by Rules; they cannot harm humans nor deny their free will. However, they can tempt humans with bargains and wagers. If either party of a demonic bargain fails to fulfill their side, then they will be trapped in Hell for eternal torment.

While the angels tried to counteract the demons' influence on Earth, they were unable to work among humans inconspicuously. So they created the Guardians, humans who die in a moment of self-sacrifice and are granted the powers and responsibilities of an angel. The Guardians have been fighting to defend humanity from the forces of Hell for over sixteen centuries. They may choose at any time to Fall and live as a human or Ascend and face judgment and the afterlife.

Vampires are half-human half-nosferatu hybrids who are born human and later changed by drinking nosferatu or vampire blood. They are neither bound nor protected by the Rules, and have free will to choose good or evil.

Tropes used in The Guardians include:
Retrieved from "https://allthetropes.org/w/index.php?title=The_Guardians&oldid=1550358"
Categories:
Cookies help us deliver our services. By using our services, you agree to our use of cookies.