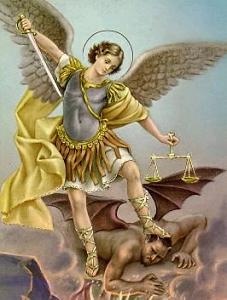 Because no-one says "Like a Bat out of Heaven".

Devils are depicted with bats' wings and good angels with birds' wings, not because anyone holds that moral deterioration would be likely to turn feathers into membrane, but because most men like birds better than bats.
—From the preface to The Screwtape Letters by CS Lewis

The quote explains the trope pretty well all by itself, so let's just jump into the many different types of wings.

Among an individual species/race of Winged Humanoids, color often counts as well. If they all have feathered wings for example, an exceptionally good or pure character will likely have white wings, while an evil one's may be black.

Add wings. Lots of wings. Three sets of wings; an angel's, a demon's, and a fairy's. Add one more wing that slipped in there by mistake, a shiny rainbow-colored feathery one that might be found on more exotic species of parrots.

"A feather dropped from Heaven!" he breathed reverently. "Are the holy angels moulting? But no; if they were, it would be white. Maybe all the angels are not for being white. What if the angels of God are white and those of the devil are black? But a black one has no business up there. Maybe some poor black angel is so tired of being punished it's for slipping to the gates, beating its wings trying to make the Master hear!"