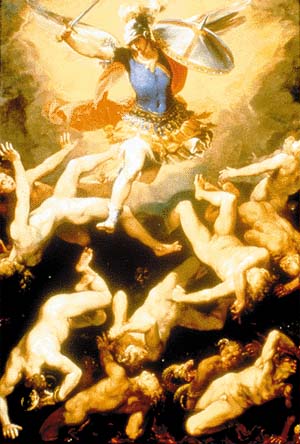 And lo, it was tasked to Michael, "cast out ye rebellious brethren and whoop some monkey ass". And God saw that it was good.

The Archangel Michael is one of three named angels in Abrahamic tradition, and is ranked as the commander of the army of God. Generally seen as the Foil to Satan (former angel Lucifer), Michael is one of the most important Angels in the Company of Heaven, as well as the most Badass. Unless Jesus (or Mary) does it personally, Michael will be the one who finally banishes or kills Lucifer for good. Interestingly though, while the Book of Revelation (as quoted above) depicts Michael as leading the heavenly host in this fight, the iconic image of him standing over a defeated Lucifer and kicking him out of heaven personally actually comes from non-canonical texts, and got folded into popular mythology over time.

Michael has commonly been depicted banishing Lucifer from heaven by using the sword, so the Sword of Michael may show up in fiction quite a bit. Said sword is often granted the epithet "Flaming" and Michael himself is strongly associated with the fire element.

Because of meaningful names, most characters simply named "Michael" will generally be good guys. Since they are Michael In Name Only, please don't list them here.

Not that this means that Michael himself has to be a good guy; banishing your own brother to Hell, even under orders from God, can still be seen as Good Is Not Nice.

Examples of Archangel Michael include:

]
Retrieved from "https://allthetropes.org/w/index.php?title=Archangel_Michael&oldid=1846373"
Categories:
Cookies help us deliver our services. By using our services, you agree to our use of cookies.