"It's Not Rape If You Enjoyed It" 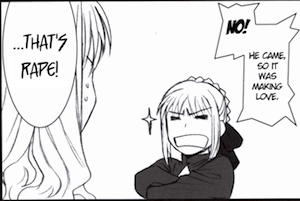 You keep telling yourself that.[1]

An excuse for rape, used by a character. Used in at least three situations:

There are real people who believe these things make rape into not-rape, or at least make it excusable. The law doesn't see it that way, and a person whose morals really justify violating a person's consent for fun is hardly moral at all, never mind how the victim feels.

Do not confuse this with Victim Falls For Rapist: the latter is about a rape setting up characters as a couple, even though one or both of them, as well as outsiders, know and acknowledge that it was rape. This trope is about the situation where the rapist and/or outsiders deny that it was a rape at all, because the victim became physically aroused or climaxed.

It should also not be confused with "rape fantasy", which is exactly that - a fantasy situation acted out by two (or more) parties with mutual consent. Just because someone is into this kind of fantasy roleplay does not mean they are "asking for it."

Unfortunately, this trope will often lead to Double Standard Rape (Female on Male).

No real life examples, please; incriminate yourself elsewhere (your local police would be interested), and don't use this page to smear the reputations of other people.

Examples of "It's Not Rape If You Enjoyed It" include:

Brick: "If it's so bad, then why are you moving your hips?"

Astral: (confused) "But... but that's not what you said, earlier!"
Maria: (flustered) "Sh-shut up, you! And anyway, that was my body talking! Against my own will!"
Astral: "But that's ridiculous!"
Maria: (grins snidely) "You actually think I enjoyed having some nasty Shadow man thingy inside me?! Heh, you must be crazy!"

Misa: Noooo! Let me stay. I know you would have gotten hard in another minute or so.

[from the book] Bond liked the look of her. He felt the sexual challenge all beautiful Lesbians have for men. He was amused by the uncompromising attitude that said to Goldfinger and to the room, "All men are bastards and cheats. Don't try any masculine hocus on me. I don't go for it. I'm in a separate league."

"He took me, with that filthy roadhouse whiskey on his breath, and I liked it. I liked it!"

"And don't delude yourself this was rape. That would flatter us both."

"Not rape. I believe," said Mr. Betteridge, finding a rock on which he could stand. "Not in the case of Cohen the Barbarian. Ravishing, possibly."
"There is a difference?"
"It's more a matter of approach, I understand." said the historian. "I don't believe there were ever any actual complaints."

Jenna: It's not rape if neither of us want it!

Spike: I want Dru back, I just gotta be the man I was. The man she loved. I'm gonna do what I should have done in the first place. I'll find her, wherever she is, tie her up, torture her till she likes me again. Love's a funny thing.

Perp: "But he got a hard-on, he enjoyed it!"
Fitz: "I've had a hard-on from the vibrations of a bus, it doesn't mean I want to shag the conductor."

You said:
Well I've got no time for victims and I don't think it was all that bad
If you can't run to save yourself then you deserve to be had [...]
And I think you even enjoyed it, I think I even saw you come

She's kicking and screaming, begging for me to fucking stop it
Look, you know it's not rape if you like it, bitch
So sit down like a pretty ho and don't fight the shit