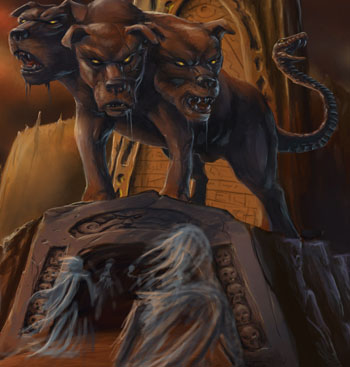 Dogs. The oldest of the domesticated animals and man's constant companion throughout history. Cute, loyal, and steadfast. Except when they, you know, aren't.

Hellhounds have been appearing since Hesiod wrote his Theogony, making this one Older Than Feudalism. Standard hellhounds are black with glowing red or flaming eyes. They may have two or even three heads. Famous hellhounds are Cerberus and the Hound of the Baskervilles. Fenrir may also fit, and Garmr certainly does.

As their name implies, they are generally thought to originate in the underworld, but this has become a relaxed requirement for modern incarnations.

Although their origins are impossibly varied, they can generally be lumped into three categories:

Escaped or deliberately released from Hell, these hellhounds exist only to hunt and kill. These are usually "hellhound classic," appearing as black hounds with red eyes. The eponymous hound from The Hound of the Baskervilles is probably the most famous example of this type, although it turned out to be a fake.

This version is usually just as dangerous as the Hunter, but it is tasked with guarding a location or person. If they're guarding a person, that person is usually associated with Hell. The most famous guardian hellhound is of course Cerberus. Garmr is the same but with a Northern accent (lots of Hells have a North).

The sight of one of these black dogs was a Portent of Doom. They might be malevolent or outright dangerous. Myths are split between the sight of the Black Dog being the cause of the misfortune or merely a symptom. The Barghest of Yorkshire may be the best known example, although the Grim from Harry Potter may be replacing it due to Popcultural Osmosis.

Classical hellhounds are immune to Kick the Dog, and its obvious menace makes its counterattack less a case of The Dog Bites Back than a result of Bullying a Dragon. It's almost impossible to scare these dogs, so any character who can is one to be very cautious around. May occasionally overlap with Big Badass Wolf, but these are generally more supernatural/evil. May also overlap with Evil Versus Evil if they exist in a world where Cats Are Mean.

They may be part of The Wild Hunt or the Legions of Hell. Compare to Hellish Horse. Contrast Heroic Dog and Big Friendly Dog.

Examples of Hell Hound include:

Retrieved from "https://allthetropes.org/w/index.php?title=Hell_Hound&oldid=1849494"
Categories:
Cookies help us deliver our services. By using our services, you agree to our use of cookies.