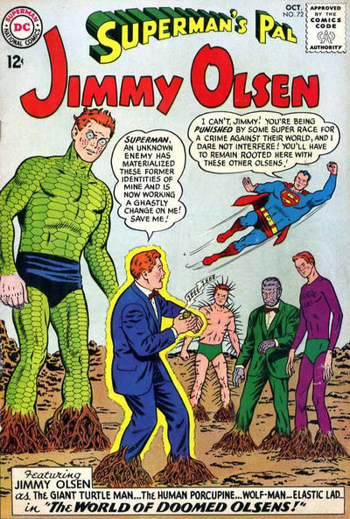 The Silver Age in a nutshell. Take four shots.

Depending on who you ask, either a magical time when comic books were wonderful and everyone read them, or a historical relic where everything was childish, pointless, and/or ludicrous. (Or both.)

The Silver Age lasted from 1954 or 1956 to about 1970 (though some people count everything up until 1985 as part of it, folding in the The Bronze Age of Comic Books). Note that this is the period that spawned the '60s Batman series, and no, this is not a coincidence. The Silver Age was a time of talking gorillas and super-powered pets, of covers that were created before the story and seventeen types of Kryptonite. It was naive and visionary, futuristic and outdated. And every Superhero comic published today owes something to it.

In the late 1930s, the Superhero had been born, and the genre exploded, with hundreds of titles published at the height of the time now known as the The Golden Age of Comic Books. Unfortunately, by 1950, comics had suffered the one-two punch of the end of World War II (taking away the then-largest enemy for the heroes to fight, and the interest in people waging an ongoing battle) and the publication of Frederic Wertham's Seduction of the Innocent, a book that accused comics of creating juvenile delinquency and sexual "deviancy", and which led directly to the creation of the Comics Code. Superhero comics slowly vanished from the stands, to be replaced by horror comics, Westerns, monster comics, romance comics, humor comics, and other genres, with only a few (Superman, Batman, and Wonder Woman among them) still surviving.

And then, in the September–October 1956 issue of DC Comics's Showcase, something magical happened. A remake of the super-speed character The Flash, with a new costume, secret identity, and origin, spiked the sales charts. After a couple more test issues, they gave him his own title, and tried redoing another Golden Age character, Green Lantern. This, too, was successful, and the Superhero genre was off to the races. Within a couple years, several other companies threw their hat into the ring, such as Atlas, Charlton, and ACG. In 1961, Stan Lee of Marvel Comics was told by his boss to create something in the vein of DC's Justice League of America. Thus, the Fantastic Four appeared on the stands, and Marvel's innovative characterization-based approach to comic books appeared.

The Silver Age could be split between these two approaches—the more old-fashioned style, with stalwart, lantern-jawed heroes solving the plot through logic and creative use of their signature abilities, and the more characterization-based style, where heroes dealt with supervillains and inner demons alike. One could say that the Silver Age ended when Jack Kirby, one of the creators of the latter style, moved to DC, the mainstay of the old-fashioned approach. However, Steve Ditko, the third major founding talent of Marvel Comics and co-creator of Spider-Man, had crossed over before him.

The Silver Age was, in a word, silly. Due to the assumptions of the Comics Code, creators were generally restricted to creating entertainment for children, and the Code's guidelines as to what was age-appropriate were very strict, precluding a lot of possible storylines that might deal with more mature themes. The Fifties also saw a general turn toward conservatism in American society as a reaction against the disruption of the war, and pushing the envelope or questioning social norms was frowned upon. This is most obvious when it comes to female characters, who had been more independent back in the Golden Age: the Silver Age is the time when Wonder Woman became vaguely apologetic about rescuing male characters, and Lois Lane, who had been portrayed as an ambitious career woman before, decided her main goal in life was forcing Superman to marry her and becoming a housewife. Morality in Silver Age comics was extremely black and white; heroes in particular followed a strict, moralistic code of conduct. Since dealing with serious real-world issues was frowned upon, wacky Speculative Fiction plots that bore no relation to reality became increasingly common. Supervillains' plans were usually more goofy than genuinely threatening. Superheroes had names like Something Person or The Adjectival Superhero, which would seem too narmy today, and they would develop New Powers as the Plot Demands no matter how flimsy the justification or how absurd the power (one word: super-weaving). Since realism and consistent characterization were not exactly high priorities, the age saw a lot of Super Dickery: Silver Age Covers Always Lie, and characters would frequently be seen doing something bizarrely out-of-character on the cover just to attract more buyers. Depending on who you ask, all this wackiness is either the Silver Age's fatal flaw or all part of the charm.

Another fascination of the Silver Age was Science! The Silver Age occurred alongside the Space Race. Science was the answer to, and source of, every problem. The mutations of the X-Men, the alternate universe known as Earth-2, the alien conqueror known as Starro—the genre was filled to the brim with Speculative Fiction Tropes. Many of the more fantasy-based heroes of the Golden Age were remade with scientific origins and powers. Of course, the science wasn't necessarily very scientific. The authors were rarely scientists themselves, and even those who were didn't let the facts get in the way of an exciting story, especially when the stories were already so goofy. Thus, you had stuff like ice missiles that were attracted to speed, people who were exposed to radiation receiving superpowers instead of cancer, and so on.

Which is not to downplay its significance, mind you. Many of the most famous comic book characters and story-lines came from this era (The Avengers, Spider-man, X-Men, Daredevil) and many new ideas were created that would become standard in future comics: Superheroes as a social platform? The teenage masked hero? They came about here. As well as how already existing characters were changed. (Many of the most famous elements and characters in The Green Lantern were non-existent in the Golden age).

Over time, social mores relaxed and the moral panic around comic books faded. The Superhero genre began deliberately distancing itself from Silver Age silliness in an attempt to prove that comic books were a medium that could tell stories that were relevant to adults as well as kids and dealt with serious real-world issues. This trend toward a more serious tone and more socially relevant stories continued throughout the Bronze Age and culminated in the grim darkness of the Dark Age. In the Modern Age, however, the pendulum has started to swing back (which might qualify the various Ages as parts of a Cyclic Trope). Currently, Batman the Brave And The Bold is actively reviving the age in a modern setting.

Notable series of the Silver Age:

The brilliant computer game Freedom Force and its almost-as-brilliant sequel Freedom Force Versus the Third Reich, both from Irrational Games, are loving homages to the Silver Age, played 100% straight.

Usually accepted as lasting from the foundation of the Comics Code until Jack Kirby's move to DC. (1954-1970). Alternatively starting with the reintroduction of the Flash (1956). Alternatively ending with price increases to 15 cents (1969) or Spiderman #100 (1971).

Retrieved from "https://allthetropes.org/w/index.php?title=The_Silver_Age_of_Comic_Books&oldid=1552740"
Categories:
Cookies help us deliver our services. By using our services, you agree to our use of cookies.