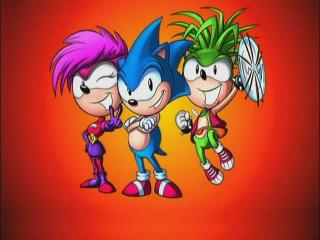 Adapted from a French cartoon called Sonic le Rebelle, this was the third Sonic Animated Adaptation made. It was produced by DiC Entertainment.

Sonic and his two siblings, Sonia and Manic, are left by Queen Aleena the Hedgehog as Doorstop Babies to families, each of a different class. Eventually, they meet together when grown up, and guided by the Oracle of Delphius, they set out to thwart Robotnik, find their mother, and form the Council of Four.

Widely panned among much of the fandom, although, like every show, it is not without its fans.

Thanks to so many Original Characters and the omission of almost all the official characters existing at the time, despite there being potential room for them (Cyrus could easily have been Tails), and since many of the background characters were more alien than any Earth-based animal, many Sonic fans and even fans of the series debated that it was really even intended to be a Sonic show, and that the characters of Sonic and Robotnik were just a hook for Sonic fans. Even the series plot is basically a This Is Your Premise on Drugs take of the Sonic Vs. Robotnik story.

Regardless of the characters used, it was most likely the "hook" for the show that resulted in its thorough panning. This was that the REAL premise of the show was that Robotnik had banned all music (if they'd made it more about the 'freedom of expression' that music represents it might have made sense, but Robotnik just hated music), and our three protagonists were Musical Assassins with The Power of Rock. Each episode's climax would inevitably be a song performed by the triplets, often with An Aesop based on the events of the episode.

Tropes used in Sonic Underground include:
Retrieved from "https://allthetropes.org/w/index.php?title=Sonic_Underground&oldid=1517188"
Categories:
Cookies help us deliver our services. By using our services, you agree to our use of cookies.