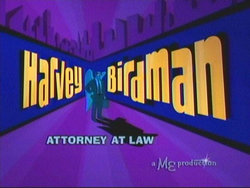 Who is the man in the suit? Who is the cat with the beak?

Harvey Birdman, Attorney at Law (2000-2007) was a comedic American animated television series created by Williams Street for Cartoon Network's Adult Swim block. The show revolved around the day-to-day activities of a law firm staffed mainly by superheroes and other characters featured in 1960s-era animated series produced by Hanna-Barbera, particularly Birdman and the Galaxy Trio.

The main character is Harvey Birdman, a 1960s superhero who has traded in most of his superpowers for "power of attorney", and now works at the Law firm Sebben & Sebben, under Phil Ken Sebben ("Falcon 7", his boss in the original show). In each episode, Birdman has to deal with all manner of hassles at work and in the courtroom while defending such clients as Fred Flintstone (accused of being a mob boss), Secret Squirrel (accused of public indecency), Boo-Boo Bear (accused of being a mad bomber) and other iconic Hanna-Barbera characters from The Dark Age of Animation -- bringing new meaning to the phrase Lawyer-Friendly Cameo, indeed. His most common opponent is the neurotic supervillain-turned-prosecutor Myron Reducto. Harvey Birdman, Attorney at Law was known for its fast-paced jokes and pop-culture references.

It also spawned a single game of the exact same name, similar to a tongue-in-cheek Phoenix Wright: Ace Attorney (understandable, as it was made by Capcom), with loads and loads of In-Jokes and references.

Tropes used in Harvey Birdman, Attorney at Law include:
Retrieved from "https://allthetropes.org/w/index.php?title=Harvey_Birdman,_Attorney_at_Law&oldid=1754131"
Categories:
Cookies help us deliver our services. By using our services, you agree to our use of cookies.