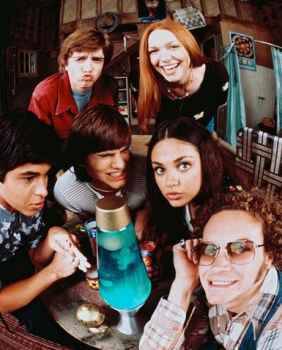 Think Happy Days for The Nineties and The Turn of the Millennium. Except this show is set in The Seventies instead of The Fifties.

This show is about teenager Eric Forman and his friends and family living their lives in Point Place, Wisconsin through the years 1976 to 1979. Remarkably, despite only three years passing through the whole series' universe, it ran for eight seasons on FOX from 1998 to 2006, becoming the network's second-longest-running live-action sitcom after Married... with Children.

Part of the humor came from anachronisms playing off modern audiences, such as the amazing video game graphics of Pong. The show's recurring running gag was that the teens often went down to Eric's basement for a "circle." Probably the best drug use humor ever used on any TV show. Even though it was never (explictly) stated on what they were really doing down there, but you can pretty much guess (the camera in the circle represented the "item" being passed around). The occasion lighter being flashed and/or puffs of smoke billowing in the background help too.

The show also employed other techniques such as scene transitions of the actors dancing in front of colorful backgrounds, split screens, scenes shown from a singular point of view (expressed through a hand held camera) and fantasy sequences.

Look at these tropes, dumbass.
Retrieved from "https://allthetropes.org/w/index.php?title=That_%2770s_Show&oldid=1867816"
Categories:
Cookies help us deliver our services. By using our services, you agree to our use of cookies.