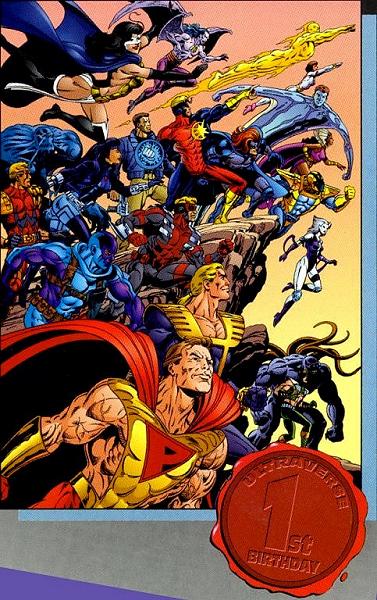 The Ultraverse was a line of superhero comic books (as well the official name of the universe they were set in) published by the Malibu Comics company during the 1990s. Although Malibu already produced some superhero comics, they decided to forgo them for all-new, interacting universe (which was believed to be one of the reasons why DC Comics and Marvel Comics dominate the American comic book industry). They hired several professional artists and writers -including noted Science Fiction writer Larry Niven- to develop the characters and ideas on which the comics would be based. These creators were lured in by an offer to share a part of the royalties.

The central concept of the Ultraverse was the "Godwheel": a flat planet the size of a solar system, with technological civilizations in one side and magic-using ones in the other. All of the power sources seen in the series came from the Godwheel, as did some of the characters. However, for the most part the general population of Earth was unaware of this, and the appearance of super powered individuals - known as "Ultras" - was believed to be a recent phenomenon. Many of the Ultraverse characters were alternate company equivalents of existing heroes, though usually given a distinguishing twist, sometimes even a controversial one.

The Ultraverse comics featured art and stories comparable in quality to anything Marvel or DC were offering at the time. Despite this, the crash of the speculator market for comics in the '90's forced Malibu to sell the line to Marvel Comics, who tried to integrate the characters to their multiverse in a story that featured the then-popular Infinity Gems. All the Ultraverse series were relaunched in altered forms (including Cosmic Retcons to their continuities). This proved unpopular with the fans, even with Marvel characters such as The X-Men's Juggernaut added in, and the line was canceled soon after.

A one-shot called Ultraverse: Future Shock resolved many of the loose ends of the canceled series, and revealed that both the original Ultraverse and the "Marvel" version still existed, in separate realities.

Marvel still owns the rights to the Ultraverse characters, but are wary of using them again because of royalty issues with the characters' creators.

The main Ultraverse series were

Tropes used in The Ultraverse include:
Retrieved from "https://allthetropes.org/w/index.php?title=The_Ultraverse&oldid=1523382"
Categories:
Cookies help us deliver our services. By using our services, you agree to our use of cookies.