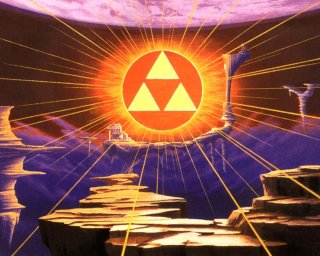 In a realm beyond sight
The sky shines gold, not blue
There, the Triforce's might
Makes mortal dreams come true.

Oh no! The world is in danger! Happiness, sunshine, puppies and ice cream will cease to exist! Why, you ask? Well, it seems that the villains have stolen, corrupted, or destroyed the Four Orbs of Fate, the Pillars of Reality, the Tomes of Prophecy and Fate or The Lifestream. The loss of even one of these is enough to make the world spiral into a hellscape of torment that would make Satan weep molten tears of envy and pride. It seems that for some unfathomable reason the Powers That Be or Crystal Dragon Jesus who created the universe saw fit to make its continued healthy existence contingent on these poorly guarded, easily found, delicate, carry-on-luggage sized objects. Obviously they never heard of redundant systems and failsafes. These are also poorly designed, allowing less than scrupulous individuals to abuse them for personal gain.

Sometimes justified if the world/universe was once healthy and self sustaining but due to some catastrophe was broken requiring the hasty creation of a Cosmic Keystone by a benevolent precursor as a patch of sorts to hold the world together.

If the villain ever gets the cosmic keystone, expect him to try and use it to destroy and/or remake the world in his own twisted image to rule over. If he even realizes the reality-central nature of the item. Sometimes the villain has a smaller goal in mind for its power; he just doesn't believe it'll destroy everything if something goes wrong, or else has an overinflated opinion on his ability to prevent that from happening. If he doesn't have it he'll tail the hero, let him do the hard work of finding it, and snatch it from the heroes' grasp at just the last second, only to fly away cackling. One would think they'd know better than to tamper with the underpinnings of reality, but villains aren't the sanest lot. When the changes can be easily reversed, there is obviously No Ontological Inertia in that cosmos.

A person who is one of these is a Barrier Maiden, and possibly a Load-Bearing Boss. Settings where reality works via the Magical Underpinnings of Reality will probably have a lot of cosmic keystones.

Examples of Cosmic Keystone include:

Retrieved from "https://allthetropes.org/w/index.php?title=Cosmic_Keystone&oldid=1904945"
Categories:
Cookies help us deliver our services. By using our services, you agree to our use of cookies.