"There and Back" Story

Everything About Fiction You Never Wanted to Know.
(Redirected from Voyage and Return)
Jump to navigation Jump to search 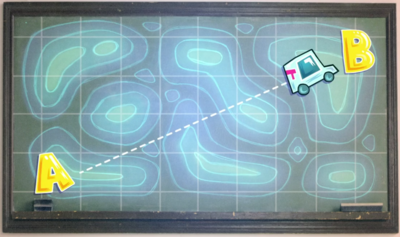 It's not the destination that matters, it's the journey!

The "There and Back" Story is a common form of plotline also referred to as a "home-away-home", centered around a form of (usually) heroic journey undertaken by a small group of characters from starting point A to destination B. The intermediate stops made along the way are usually tangential to the journey itself, and the ensemble of interesting characters that the group almost inevitably meets have their own varying levels of relation to the central plot. The trope is named for The Hobbit, which was subtitled "There and Back Again".

The journey is usually treated as a major plotline, if not the main plot itself, and the secondary and tertiary locations and characters that our group encounters are at most a source of smaller subplots, which are usually resolved shortly before that location is left - after all, it's about the journey, not the destination. That said, if a specific subplot isn't resolved immediately, expect them to come up sometime down the road.

Tropes Are Flexible, and this one is more flexible than most. (It is one of The Seven Basic Plots, after all.)

If multiple people are brought along for the ride, expect "Are We There Yet?" to be asked quite often.

For other uses of the phrase "there and back again", see the disambiguation page.

Retrieved from "https://allthetropes.org/w/index.php?title=%22There_and_Back%22_Story&oldid=1876941"
Categories:
Cookies help us deliver our services. By using our services, you agree to our use of cookies.