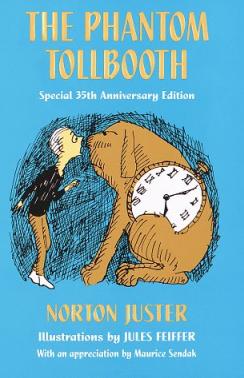 A classic children's novel by Norton Juster (and illustrated in most versions by Jules Feiffer) that has also become a favourite among adults for its intricate cleverness, rapid-fire wit and boundless imagination.

Milo is a bored little boy. Then one day he comes home from school (he's a latch-key kid) and discovers a very singular box in his room. Within are the pieces to construct a toy tollbooth. Having nothing better to do, he follows the included instructions, drives through the tollbooth in his toy car, and suddenly finds himself driving down a road under a distant sky.

Along his surprising journey he meets such colorful characters as King Azaz the Unabridged, King of Dictionopolis and the realm of words; the Mathemagician, ruler of Digitopolis and everything number-related; Tock, the loyal watch dog (literally); the oversized Spelling Bee; the shifty-but-lovable Humbug; Faintly Macabre, the not-so-wicked Which; Chroma the Great, conductor of the sunrise; the Soundkeeper, who greedily keeps all sound to herself; and the sadly missing Princesses Rhyme and Reason, locked in the Castle in the Air and desperately in need of rescue from the demons of the mountain of Ignorance.

There is also an animated movie produced by the legendary Chuck Jones. A lot of the incidental wordplay and allusion is streamlined out, in favor of some catchy but extremely Seventies songs about finding your dreams by following your heart. There's a lot to be said for Jones' typically cute and energetic character designs, though, especially the ones that have Mel Blanc's voices.

As of Summer 2010, a new film version was in the early stages of pre-production, with an intended 2013 release. However, as of August 2016, the film has still not been made, the project has jumped production companies, and a whole new scriptwriter has taken over.

Tropes used in The Phantom Tollbooth include:
The movie provides examples of:
Retrieved from "https://allthetropes.org/w/index.php?title=The_Phantom_Tollbooth&oldid=1874559"
Categories:
Cookies help us deliver our services. By using our services, you agree to our use of cookies.