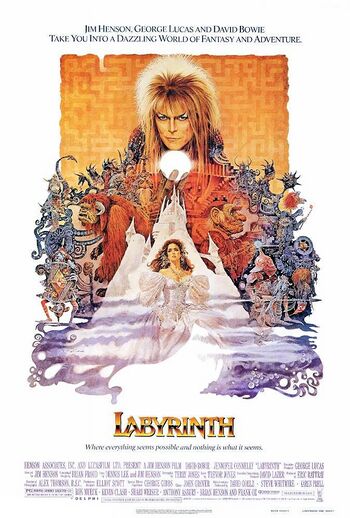 Labyrinth is a 1986 Jim Henson film executive produced by George Lucas, a musical fantasy starring David Bowie and Jennifer Connelly. Sarah is an unhappy teenager, who hides from life in fantasy tales to the point of dressing up in a long flowing dress and acting bits of script in the park. The cause of her unhappiness is her father's remarriage and the resulting half-brother, Toby (played by concept artist Brian Froud's son Toby), about a year old at the time of the action. One night, in a particularly big sulk, she wishes that the Goblin King (called Jareth) would come and take Toby away -- which, to her horror, he immediately does. He then offers her a dream-fulfillment crystal if she'll agree to forget Toby, which she refuses. Jareth gives Sarah a chance to rescue Toby; he takes her to his realm, where she must find her way through the Labyrinth to Jareth's citadel before thirteen hours elapse. In this she is aided by various goblins and monsters whose allegiance to Jareth is highly conditional or non-existent.

Is a Spiritual Successor to The Dark Crystal, and was itself Spiritually Succeeded by Mirror Mask. Although a box office flop, it has since become a Cult Classic.

The film is mainly aimed at children, but has plenty to engage an adult audience -- not least of all David Bowie's prominent package, a few fan-made drinking games, and the many, many tropes available for hunting...

A four-novel English manga sequel called Return to Labyrinth began publishing in 2006 and concluded in 2010. In January 2012, Archaia Publishing announced it will be publishing a graphic novel prequel detailing Jareth's origins.

Tropes used in Labyrinth include:

"Thank goodness, all those David Bowie crotch jokes are over!" "Hey, look at that bulge..." "SHUT UP!!!"

Retrieved from "https://allthetropes.org/w/index.php?title=Labyrinth&oldid=1963080"
Categories:
Cookies help us deliver our services. By using our services, you agree to our use of cookies.