Yet Another Christmas Carol 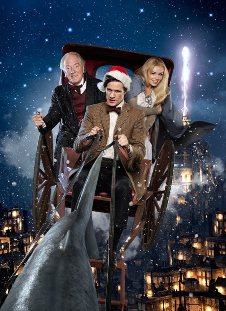 This time in space...with sharks.

Every television series in the history of the world that lasts long enough to have an episode aired at Christmas will make use of this boilerplate episode. The hero or heroine of the series lives through his or her own version of Ebenezer Scrooge's Christmastime visitations from A Christmas Carol.

Second only to It's a Wonderful Life as a well-known story which a series adapts to/parodies with its own characters. The original was by Charles Dickens: it was published in 1843, making this Older Than Radio. When used in TV shows, characters from the show frequently fill the roles of the ghosts: Marley, who serves to announce that the other ghosts are coming and serve as an illustration of the eventual fate of Scrooge's soul; the Ghost of Christmas Past, who shows the Scrooge character "You weren't always this way"; The Ghost of Christmas Present, who shows them "Other people aren't this way"; and the Ghost of Christmas Future ("Yet to Come" in Dickens' original, often portrayed as The Grim Reaper), who shows the character "Look how things will turn out if you stay this way." Results in the character having a change of heart and turning away from whatever character flaw was being explored.

If they're willing to go the extra mile on the homage to A Christmas Carol, then our protagonist will be a Corrupt Corporate Executive or otherwise in a position of power where he or she is able to make life miserable for those under their thumb. Expect one of these underlings to be a stand-in for Bob Cratchit. Bob Cratchit's counterpart is always a sympathetic character who bears the brunt of whatever bad the protagonist dishes out and takes it exceptionally well. Once we have these two roles filled and established, the audience can then wait with bated breath to find out who is standing in for Tiny Tim. Like the original Tiny Tim, the stand-in might be related to our version of Bob Cratchit, but doesn't have to be. However, you can reasonably expect him or her to be Inspirationally Disadvantaged, poor, or otherwise so needy that he or she is automatically sympathy bait for the audience. Whichever way the Tiny Tim is in need, the protagonist is in a position to do something about it, but won't, or else has prevented him or her from receiving assistance, and it will be brought up to remind our Scrooge as well as the audience what a bastard he or she is.

Almost invariably (see Blackadder's Christmas Carol for an exception) results in An Aesop. What Aesop is learned can depend, however. In the original Christmas Carol it was Scrooge being forced to confront what he had lost, and what the consequences of his current actions are and would be, the awakened the Christmas Spirit within him. Furthermore, the original had a generally horrible person Aesopped into decency, whereas some adaptations have resulted in a bizarre "You will be merry or else" lesson, where a character who simply doesn't like Christmas is taught the error of their ways. After all, Scrooge hated Christmas...

Similar to the Flash Back and Flash Forward, but bound by the specific narrative structure of the Dickens novel.

Usually these are a type of Christmas Episode, although sometimes a variation is employed that has nothing to do with the holiday season.

A very popular Fanfiction trope, with most shows having at least one such plot in their Fan Work. For actual Christmas carols, see Christmas Songs.

A Sub-Trope of Whole-Plot Reference (so anything less than the plot is merely a Shout-Out) and Christmas Ghost Story.

Compare How the Character Stole Christmas and It's a Wonderful Plot. Related to Time Travel, particularly Intangible Time Travel—as well as Pensieve Flashback.

Examples of Yet Another Christmas Carol include:

Retrieved from "https://allthetropes.org/w/index.php?title=Yet_Another_Christmas_Carol&oldid=1749619"
Categories:
Cookies help us deliver our services. By using our services, you agree to our use of cookies.