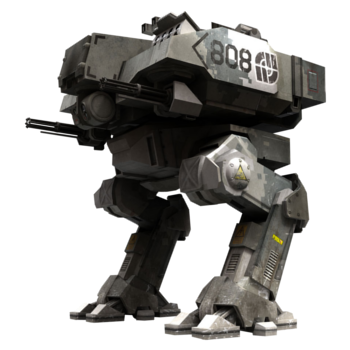 Be shot or be stomped.

A common feature of military stories set in Steampunk settings, and also Twenty Minutes Into the Future and beyond, a Walking Tank is just that; a tank with legs instead of treads. If it has arms (they don't always), they're usually decidedly non-humanoid in appearance (elbow-joints optional), and more likely to end in Arm Cannons instead of hands.

While slightly more reasonable than the humanoid Humongous Mecha more common to Japanese media, these still mostly fall into the Awesome but Impractical category, and thus this trope owes its existence primarily to the Rule of Cool. Pretty much the only reasonable justification is the ability of legs to more easily handle rough terrain, but that's generally pretty flimsy.

Given that they're used almost exclusively by military forces, it should be no surprise that Walking Tanks are always treated as Real Robots. The physics are also generally handled pretty realistically. Don't expect these guys to be dodging missiles at high speed at any point; they're never nimble. Taking advantage of this fact is usually the best way to take them out; wrap some high-tension cable tight around the legs and then stand back to watch the show. If you're lucky, Every One Of These Is A Pinto. If you're not, the design includes all-round machinegun coverage.

This is a Super-Trope of Chicken Walker and Spider Tank, and Sister Trope of Humongous Mecha.

Examples of Walking Tank include: