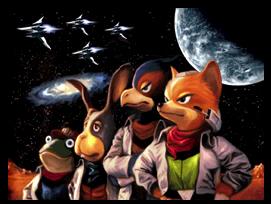 From left to right: Slippy, Peppy, Falco and Fox.

There are currently five games in the series, only four of which are "true" Star Fox games. Some of the games had different names for European releases due to trademark issues.

The series is also notable for its long-rumored but never actually released second installment (that has had a late beta version leaked), Star Fox 2. Elements of that game were recycled into Star Fox 64 and (much more obviously) Star Fox Command. An arcade game was also planned during the development of Star Fox Assault made by Namco, a la F-Zero AX, but was canceled some time in the middle of development. The series protagonist Fox has also appeared as a starting character in all three Super Smash Bros. games, and was joined by his teammate Falco in Melee and his rival and sometime ally Wolf in Brawl.

There is a character sheet, as well as a voluminous YMMV section.

Tropes used in Star Fox (series) include:
Retrieved from "https://allthetropes.org/w/index.php?title=Star_Fox_(series)&oldid=1936815"
Categories:
Cookies help us deliver our services. By using our services, you agree to our use of cookies.