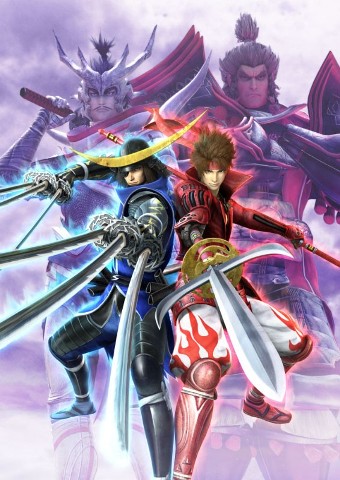 Are you ready guys?

Sengoku Basara is, in a way, a copycat of Samurai Warriors, only made by Capcom. The main difference is the stylish, ludicrously over-the-top gameplay, characters, designs, and portrayal of Japanese history. While still loosely based on Real Life, they decided to throw most historical accuracies out the window and come up with their own story. They didn't want a historical simulation like Koei did, they just wanted a new-generation Hack and Slash with a Sengoku Period setting.

The result was a game that abandoned logic and ran entirely on Rule of Cool, a World of Badass where everything goes Serial Escalation. Expect a lot of Flanderizations here, both good and bad, and lots of well known seiyuu voicing the characters (Soichiro Hoshi and Mamiko Noto for example). Oh, plus the music is awesome, and has received consistent praise. The series holds a strong fanbase, especially in Japan, mainly because if nothing else, it's just fun.

Capcom attempted to bring the first game to the west by giving it a Cut and Paste Translation treatment in the form of Devil Kings, which changed the characters' names and removed all Sengoku Period references. Safe to say, it bombed and Capcom has been scared to bring the Sengoku Basara sequels to western audiences.

There are three main games in the series so far, as well as a couple of spin-off titles for various different consoles:

An Anime adaptation of the series started airing on April 1, 2009. A second season began July 11, 2010 followed by a feature film debuting in cinemas June 4, 2011. FUNimation picked up the series to be dubbed, as Sengoku Basara rather than Devil Kings, and with an equally-popular cast of who's-who in voice acting.

In the wake of that, Capcom announced that Sengoku Basara would be brought to the US and Europe once more, starting with the third game, translated faithfully, and titled Sengoku Basara: Samurai Heroes.

There is also a manga adaption, Sengoku Basara Ranse Ranbu. The first, second and third games have also been made into manga, all by different artists. A High School AU called Basara Academy has been published, with two volumes so far.

It should also be noted that this game has a parody of itself made by AliceSoft, namely an H-game called Sengoku Rance, the seventh in the Rance series with different gameplay setup (for obvious reasons, though both are quite good games in their own right), but both share the idea of taking a very Broad Strokes version of history, embellishing it with tons of Rule of Cool, and turning the whole thing into a World of Badass.

Not to be confused with the shoujo manga Basara.

This page contains spoilers for both the games and the anime.

The anime includes examples of:

Retrieved from "https://allthetropes.org/w/index.php?title=Sengoku_Basara&oldid=1801081"
Categories:
Cookies help us deliver our services. By using our services, you agree to our use of cookies.