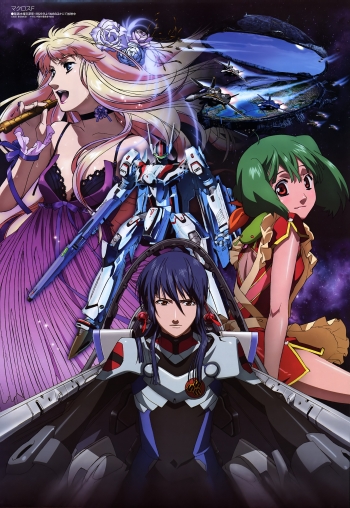 The last entry in the popular Super Dimension Fortress Macross franchise, which concluded Japanese airing on September 24, 2008. The series began airing during Macross' 25th anniversary and has proven immensely popular (its Blu-Ray release was the single best selling HD release in the entire Japanese marketplace in 2008, and one of its soundtracks sold as many in its first week as an Evangelion soundtrack - a decade-old record). (1) (2) It even spawned two movies (see below).

The story is set in 2059 aboard (and in the space surrounding) the titular Macross Frontier, one of the many colonization fleets heading from Earth towards the centre of the galaxy in search of a new home to settle. However, Frontier's mission is suddenly disrupted when it comes under attack from a bug-like alien race known as the "Vajra".

There are three main characters: Alto Saotome, an ex-kabuki actor turned sky-pilot who feels oppressed by the domed skies of Macross Frontier but also an obligation to protect them; Ranka Lee, a spunky young girl with a severe case of post-traumatic stress disorder and a dream of becoming an Idol Singer; and Sheryl Nome, a popular and headstrong Idol Singer from the neighbouring Macross Galaxy fleet who is known as "The Galactic Fairy".

The stories of these three intertwine amidst the Vajra attacks on the Macross Frontier, slowly revealing dark conspiracies that seem destined to determine which direction mankind will move forward into the stars.

This clip features a great many visual examples of several of the tropes listed below. Note that this is merely part of one of the less intense battles of the series...

A movie version was announced at the airing of the last episode of the series. It was initially expected that it would largely be a clip show of the series with some new scenes, similar to Macross Plus, but as the project developed it eventually became more of an Alternate Continuity retelling that was split into two movies. The first, The False Songstress, was released in November 2009 and covers the range of episodes 1-7 in the series, including numerous new and altered scenes as well as several new songs. Some scenes were altered quite drastically. For instance, Sheryl Nome's fall during her first concert in episode one was caused by Alto accidentally knocking her off during a stunt, while in The Movie she jumps off the stage by her own free will. The second movie, The Wings of Goodbye, was released on February 26, 2011. It resolves the Love Triangle that has hounded the show since the first episode.

Oh, and they also made the battles even more awesome.

Please contribute to the Character Sheet!

Note: Refrain from calling Word of God in this article unless you can provide confirmation, as a number of "interviews" were actually fakes orchestrated by a then respected person in the Macross Community. More information can be found here and here For a general overview of the fake interviews go on the Trivia page.

Tropes used in Macross Frontier include:
Retrieved from "https://allthetropes.org/w/index.php?title=Macross_Frontier&oldid=1965624"
Categories:
Cookies help us deliver our services. By using our services, you agree to our use of cookies.