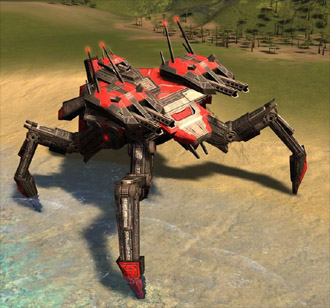 A subset of the Real Robot Genre, with a decidedly non-humanoid appearance. These are often used by sci-fi series that want to use giant robots, but feel that humanoid shapes won't fit the setting. Even if the setting doesn't use giant robots, and sometimes even if it does, smaller Spider Tanks may be found as robotic drones. In series that use giant humanoid robots as well as spider tanks, you can bet that the humanoid robots will often be more agile than their multi-legged counterparts, despite the fact that the opposite logically would be true.

The form has a number of advantages over the human shape: lower to the ground (thus less of a target). Your classic Spider Tank spreads its legs out more, making the vehicle more stable overall and allows it to traverse terrain that would give wheeled vehicles considerable trouble. All of which helps it cheat that pesky Square-Cube Law that gives giant humanoids considerable engineering problems. (Of course many settings then turn around and give it pointy ballerina feet, ruining any overall improvement in the ground-pressure department, but hey.)

While wheels are faster and more efficient and tracks are best on a soft ground (it's hard to beat one big support area), spider legs can navigate extremely rough terrains and are more reliable because the vehicle can stand or even walk after losing a leg or two. Since "extremely rough terrains" include rubble blasted all over streets or hedgehogs made of rails and "losing a leg" includes little gifts from artillery, you see why an excavator isn't the only potential application. In fiction this means the spider design is most attractive for settings supposed to be gritty and realistic - exactly because it can believably retain some functionality despite a lot of visible damage.

Depending on the size of the Spider Tank, it may or may not have wheels on its feet. Caterpillar tracks are also common. If the Spider Tank is under 4 meters (roughly 12.5 feet) tall you can expect it to have wheels or tracks on its feet; if larger, you can expect it won't. It will probably have pointy feet instead. Despite the name, Spider Tanks rarely have eight legs. Four is the most common, and some have six. It's usually guaranteed that they'll have an even number of legs, though.

Please note, Spider Tanks are not tanks designed to look like spiders; they are simply tanks that walk like spiders (or scorpions). If you encounter a giant robot shaped like an insect or arachnoid it's more likely that they are a Mechanical Horse and not a true Spider Tank. In video games some Real Robot humanoid mechas occasionally have four or more legs, but still have an upper body and arms. They are also not spider tanks, as they do not fulfil the tank requirement. It's also not an arachnid version of the Snake Pit or Shark Pool.

A similar (and broader) concept is Tripods. See also Giant Spider and Giant Enemy Crab for their autonomous organic counterparts. Sub-Trope of Walking Tank and, depending on the type of Spider Tank, Starfish Robots.

Examples of Spider Tank include:

Retrieved from "https://allthetropes.org/w/index.php?title=Spider_Tank&oldid=1823786"
Categories:
Cookies help us deliver our services. By using our services, you agree to our use of cookies.