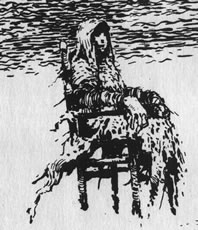 Death was just the beginning.

A Storytelling Game of Death and Damnation.—1st edition Tagline

A Storytelling Game of Passion and Horror.—2nd edition tagline

A tabletop role-playing game in the Old World of Darkness, considered by many to be one of the most depressing of the lot. First of all, you start off dead. And we don't mean undead, we mean dead. You've failed to pass on to the true afterlife, and your soul has ended up in the Shadowlands, a decaying spiritual reflection of the real world. You're bound to this side of reality by your Fetters and Passions, emotional and physical ties to your old life. You have to negotiate the viper's nest of politics that's been set up in the Shadowlands—a three-way clusterfuck between the oppressive Hierarchy, the revolutionary Renegades, and the devout Heretics—while trying to protect and, eventually, resolve that which ties you to this life and move on to the true afterlife.

Wait. It gets worse. Also parking its tuchus in the Shadowlands is a grand malevolent force known as Oblivion. Seeking to drag all existence down its sinkhole, Oblivion sends its soldiers, the Spectres, out to make the world a much worse place. One of those soldiers is parked in your head. It's called your Shadow, and it's constantly going to wheedle you, cajole you, taunt you, set you up, and make your life a living hell until you give it what it wants—that is, all control over you, making you a Spectre in full.

Wraith was considered a tough concept to handle, even for the World of Darkness. The characters were constantly at war with themselves (and sometimes each other) while trying to find their place in both life and death. The first edition focused more on the personal struggles than the actual setting; it took the second edition to truly flesh out the Shadowlands. Wraith was the first and only gameline in the Old World of Darkness to be cancelled before The End of the World as We Know It.

The game later received a Spiritual Sequel in the form of Orpheus (which dealt with humans and ghosts who dealt with troublesome spirits and investigated the wreckage of the Shadowlands). The New WoD gameline Geist: The Sin-Eaters is another spiritual sequel, delving into the NWoD's Underworld, with the PCs basically being half-human spirit mediums who have merged with mostly beneficial—if unbalanced—ghost partners.

Tropes used in Wraith: The Oblivion include:
Retrieved from "https://allthetropes.org/w/index.php?title=Wraith:_The_Oblivion&oldid=1757186"
Categories:
Cookies help us deliver our services. By using our services, you agree to our use of cookies.