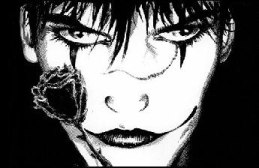 "People once believed that when someone dies, a crow carries their soul to the land of the dead. But sometimes, something so bad happens that a terrible sadness is carried with it and the soul can't rest. Then sometimes, just sometimes, the crow can bring that soul back to put the wrong things right."

—Sarah, from the movie version

In 1978, a drunk driver killed James O'Barr's fiancée, Bethany. O'Barr later heard a story about a couple killed for the woman's twenty-dollar engagement ring. The two incidents became one in O'Barr's mind, leading him to write a comic book titled The Crow, which saw publication in 1989, in an attempt to work out his angst over the incidents.

The Crow tells the story of two lovers, Eric and Shelly, who end up brutally murdered by a street gang after their car breaks down on the wrong side of Detroit. A year later, a crow spirit brings Eric back from the dead; guided by the crow, Eric tracks down the gang members one by one and kills them in increasingly creative and brutal ways, never stopping until they all end up dead and he can return to his eternal rest.

Alternately, The Crow tells the story of two lovers, Eric and Shelly, who end up attacked by a street gang after their car breaks down on the wrong side of Detroit. Eric barely survives—but only in a purely technical sense, as the attack left him as a scarred, insane wreck of his former self who has refused to allow himself to die until he takes revenge on the thugs who raped and murdered his beloved. One year later, guided by the hallucination of a talking crow, Eric tracks down the gang members one by one and kills each of them in increasingly creative and brutal ways, never stopping until they all end up dead and he turns a gun on himself.

Unlike The Film of the Book, the comic never makes it entirely clear what happens in the story; of the numerous alternate interpretations of the story, the two summaries above remain the most clear-cut versions of events.

The comic received a film adaptation in 1994. The story changed the murders of Eric (Draven) and Shelly (Webster) from a senseless act of violence on the wrong side of town to an act of retaliation after Shelly's anti-eviction petition campaign pisses off the wrong person: Top Dollar, the kingpin of Detroit's underworld and the architect of an annual orgy of violent destruction on the night of Halloween known as Devil's Night. Even with the changes to Eric's motivation and the broadened scope of his crusade, the movie managed to perfectly capture the flavor and emotion of the comic book. The film carries a darker legacy, though: Brandon Lee (the son of Bruce Lee), who played Eric, died during filming due to negligence involving a prop gun.

The Crow caught lightning in a bottle—the author committed his Creator Breakdown to print as it happened—and as a result, it proved impossible to replicate. Attempts to continue the franchise in both comic book and film forms followed, but none of the sequels lived up to the original (either critically or commercially). The original remains a powerful, moving statement, no matter how you slice it.

A 1998 Canadian television series based on the concept -- The Crow: Stairway to Heaven—lasted one season (22 episodes); while it garnered decent ratings, the show when Universal bought its production company, PolyGram. Universal eventually released the full series on DVD, Hulu, and Netflix.

Plans to reboot/remake The Crow have bounced around Hollywood in recent years, but thankfully, none of these plans have come to fruition.

Sequels to the original 1989 comic, created by Kitchen Sink Press, include:

Tropes used in The Crow include:

Tropes specific to the comic book

Tropes specific to the movies

Gideon: You walk outta here, they're gonna erase your sorry ass. You're nothing but street grease you hear Eric. Street grease you motherfucker!!
Eric Draven: Is that gasoline I smell?
Gideon: NO MAN!! DON'T!!!

Tropes specific to the TV series

Tropes common to the franchise

Torres: Don't any of your street-demons have real grown-up names?

"Go fuck yourself, you dried up BITCH!"

Tropes resulting from the franchise