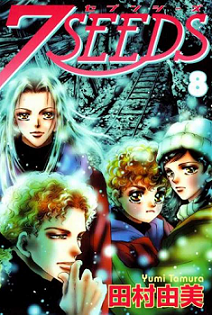 In the near future, scientists discovered that a meteor was headed towards earth and that if it hit it was expected to wipe out almost all life. World leaders met and tested a number of countermeasures. In the worst case scenario, if none of the countermeasures worked and the human race died out entirely, they created a final project, "7 Seeds". Each country took young and healthy people and put them in a cryogenic sleep: when conditions on earth had become safe enough to live in again, they would be released.

In Japan, the 7 Seeds project was organized into five teams of seven people: Team Winter, Team Spring, Team Summer A, Team Summer B, and Team Fall. The story begins some unknown number of years in the future, when Team Summer B wakes up and learns that their entire world has been destroyed and that evolution has begun to repeat itself.

7 Seeds is thought-provoking manga written by Yumi Tamura, better known for writing Basara. It's mostly adventure, science fiction, and horror, but it has touches of romance. The story is also notable for its large cast of varied characters. There is no single main character, or even main team: instead, the story regularly switches between teams, usually with one viewpoint character per team.

In 2007, the series won the Shogakukan Manga Award for shōjo manga.

Tropes used in 7 Seeds include:
Retrieved from "https://allthetropes.org/w/index.php?title=7_Seeds&oldid=1728288"
Categories: