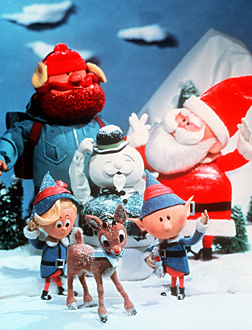 Believe it or not, the snowman is the normal one.

This mission is important. The fate of the battle, nay, the war, nay, the entire world rests on the outcome. Who has the capability to stick it out, to give the good guys the victory they desperately need? This calls for a special team. The group of experienced, highly skilled, professional, team-oriented experts? Not them. The assorted group of ex-con lowlife inexperienced jerkasses who are trying to off their commander when they aren't trying to kill each other? Yeah, them.

This is usually Justified Trope in one or more of several ways:

Your basic Ragtag Bunch Of Misfits consists of a Hero, a Sidekick, a Big Guy, a Smart Guy, an Old Guy, a Young Guy, and a Funny Guy - But you can call them The Magnificent Seven Samurai.

Of course, the Ragtag Bunch of Misfits will eventually have a Misfit Mobilization Moment to get their act together and win the day. Most often it produces casualties: typically, the guy forced to go on the mission despite being the Convicted Innocent, or the Officer and a Gentleman who's been stodgy and uptight just before making a Heroic Sacrifice.

If the characters were not forced on the team -- Condemned Contestant, Boxed Crook—they often join to be Lonely Together. To contrast their diversity, their enemies will likely be all homogenous in one way, typically by being highly collaborative professionals.

In the world of sports, this trope counts double. Last year's Super Bowl champions don't stand a chance against a random group of ex-cons, couch potatoes, and farm animals, with Improvised Training, who are almost guaranteed to pull out a last-minute win.

See also Army of Thieves and Whores for when this trope is magnified to the size of an army.

Examples of Ragtag Bunch of Misfits include:

Retrieved from "https://allthetropes.org/w/index.php?title=Ragtag_Bunch_of_Misfits&oldid=1919452"
Categories:
Cookies help us deliver our services. By using our services, you agree to our use of cookies.