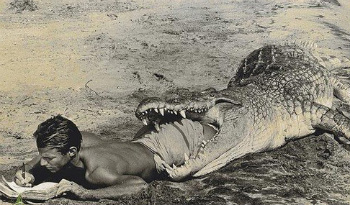 A story is told through a log, diary, or journal that a character uses to document their activities and progress through the plot. Suddenly, something happens, the effects of which are slowly made known to the reader through by its effects on the medium.

Expect that one dedicated character will keep recording events up until their last breath and that log will be discovered by the Hero or the audience. These logs generally start the same way with hopeful characters recording the details of their lives and work. But when things start going sideways the entries will start conveying concern, disbelief, desperation and ultimately insanity. They might ominously report about how mysteriously hungry they now feel, among other symptoms. The final entry can either be incoherent gibberish as the remaining character tries to warn the world of what happened, or a final cogent statement warning the reader not to repeat their mistake, or how to end it.

This log can be written or recorded. If it's a video log, the downhill progress of the situation will be punctuated by a degradation in the appearance of the character, their surroundings, or even the video itself. Bonus points if the log's final entry has the character ultimately succumbing to whatever horror was released. Double bonus if the log is written and still records the author's last seconds. (See the page quote.)

Depending on the nature of the apocalyptic event, the recording may have gone through Ragnarok Proofing.

A handy way to fill in heroes who are Late to the Party, and one of the last things "rescuers" answering a Distress Call will find.

Not to be confused with the apocalyptic Loge from Richard Wagner's Götterdämmerung, or for that matter, The Log from Naruto the Abridged Series. Or with Apocalyptic Lag. See also Video Will, the various times when the Cassette Craze applies to disappearances, and some of the less pleasant cases of Message in a Bottle.

we were all equal in the end

THE FIRST DAY OF ETERNITY I CAN SEE NOW. FOOLS. ALL OF YOU. HAHAHAHAHA.

Retrieved from "https://allthetropes.org/w/index.php?title=Apocalyptic_Log&oldid=1892801"
Categories:
Cookies help us deliver our services. By using our services, you agree to our use of cookies.