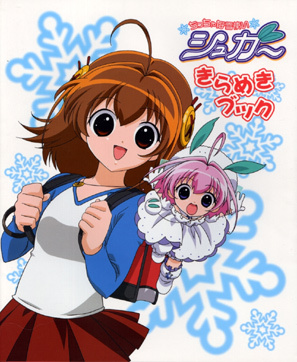 In a little town called Mühlenburg lives a girl named Saga, a talented pianist who lives by a rigid schedule and hates the unexpected. One day, she comes across an adorable little fairy, who is hungry enough to devour a waffle. This fairy, a bringer of snow (In Training) named Sugar, soon upsets Saga's delicately ordered life with her other weather-bringing classmates and their antics.

A Little Snow Fairy Sugar is an Anime First show, known in Japan as (ちっちゃな雪使いシュガー Chitcha na Yukitsukai Shugaa). This show is egregiously adorable; so much so that it can be hard to prevent cavities from spontaneously spawning in your teeth due to the sweetness.

There was also a three-volume manga illustrated by BH Snow+Clinic and published by Kadokawa Shoten. Volume 1 was released not long after the anime premiered. The plot starts off identical to the anime but later takes a dramatic turn away from it, with new concepts such as Sugar turning back into an egg instead of getting sick when Saga is stressed and unhappy over the piano. The manga also renamed the town Guttenburg.

Tropes used in A Little Snow Fairy Sugar include:
Retrieved from "https://allthetropes.org/w/index.php?title=A_Little_Snow_Fairy_Sugar&oldid=1471147"
Categories:
Cookies help us deliver our services. By using our services, you agree to our use of cookies.